How many times have we heard the following statement? “USAC/SLD cannot make E-rate policy, only the FCC can do that.” Yet in practice, most of us know this is simply not the case. To wit: this week, USAC announced what is essentially new program policy – applicants’ discount rates will now be calculated using National School Lunch Program participation, not eligibility.

According to USAC, beginning with Funding Year 2012 applicants must now use NSLP data “as of a date verifiable by their state authority” to determine the appropriate discount rate: 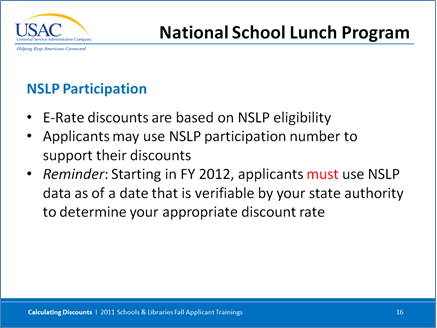 While the guidance does state that “E-rate discounts are based on NSLP eligibility,” the reality is that most states only track and report NSLP participation, which can indeed be quite different than NSLP eligibility. In this sense, USAC’s new requirement actually contradicts FCC rules. If your state tracks only NSLP participation, it sounds like those are the numbers you will be forced to use, regardless of how many students in your district are eligible. And what is the point of emphasizing that a sibling match is allowable if the results of the match are not going to be reflected in the state’s data?

“How can this be?”, you ask. Surely the SLD cannot unilaterally change policy without FCC permission. Didn’t the FCC just release an updated Form 471 and instructions? The Form 471 instructions say nothing about using state data. How would applicants who did not attend the training sessions have any idea that this new requirement is in place?

But putting aside the question of whether the SLD has the authority to make this change, there is still an unsettling question‚Ä¶ is state data really the best data for an applicant to use? If it is, why wouldn’t the FCC have included this requirement in the Form 471 instructions? Further, why even require applicants to complete the Block 4 on the Form 471 in the first place if only state data is acceptable?

The FCC has not instructed applicants that they must use only state audited NSLP data. Why? The FCC may have realized that frequently the data reported by the state is not current, or that it changes as the student population changes. Many schools report their data to the state in the fall (around the month of October) and then spend months updating and perfecting that data. Often, the official numbers – or most accurate data capturing – does not occur until late February. Historically, schools have been able to certify their NSLP data at the time that the data is captured. For most schools, NSLP data can vary on a day to day basis, and it almost always has variations on a month to month basis. As the school year progresses, applicants’ Nutritional Services Departments are often able to update the data and refine it to its most accurate status for the relevant school year. This generally occurs later in the school year, often near or after the Form 471 application is submitted.

To require applicants to use state reported data for a particular funding year is simply another example of USAC creating program policy for administrative convenience. Doesn’t it seem odd that applicants self-certify the Form 471, yet USAC wants the state to be the responsible party for validating the discount of school site locations?

This program change is simply not in the best interest of E-rate applicants. Schools are now placed in a tenuous situation – do they dare use the most accurate data, a position supported by FCC regulations and the Form 471 instructions, or do they simply “give in” and match the NSLP data on record with the state?