On February 2, the Universal Service Administrative Company (USAC) released their Demand Report for the second quarter of 2012. In the report, USAC stated that they have established “…a foundation of processes, systems, [and] procedures” to prevent waste, fraud, and abuse, and are evaluating “additional measures” to help control improper payments to beneficiaries.

The report states that both the Beneficiary and Contributor Compliance Audit Program (BCAP) and the Payment Quality Assurance Program (PQA) have been implemented, and the SLD has completed nine BCAP audits. USAC is currently in the process of conducting another 18 audits, and additional 35 have been scheduled. The SLD reports that based on their assessment, they estimate the improper payment rate for the Schools and Libraries Program to be 0.94%, for a total of $21.9 million. This amount is significantly lower than the levels reported under the FCC Office of Inspector General Audit Program.

The FCC's Third Report and Order directed USAC to apply unused funds to increase the amount of available funding for a particular funding year. Each quarter, USAC is required to revise their estimates of available unused funds, and it was reported that USAC currently has $250 million available for rollover.

The quarterly report also highlighted the number of pending applications (Forms 471) remaining for each funding year. As of December 31, 2011: 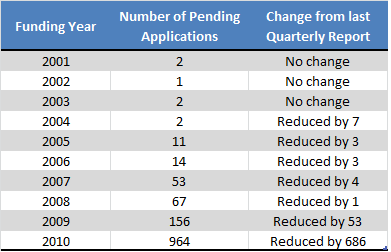