Have you ever experienced pain in a joint when the weather is scheduled for a sudden change? With ten plus years of my life dedicated to compiling and analyzing E-rate data, my knee hurts. Yes, my knee hurts. This usually means for me that the E-rate climate is about to change. I don’t claim to know what may be coming, but just like my Grandma used to say “it’s about to rain”, I believe that it is about to rain commitments for Funding Year 2012.

One trend that I have noticed over the years is that the later the filing window closes, the later the first funding wave is released. If history is our guide for what’s to come, the first wave will be released next week. This will be approximately the same count of days from the close of the filing window to the first wave release from last year, 94 days. Based on the pain I have in my right knee, I’m hopeful that we will see the rain before its 94th day!

Let’s hope that the 2013 filing window closes in February next year. 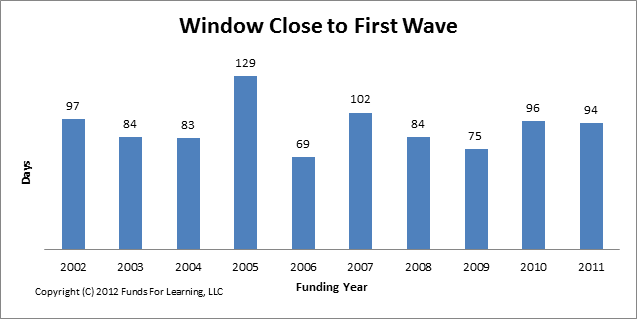