This week, USAC issued its 11th FY2015 funding wave. Funding commitments have been averaging almost $100 million per week.  This puts FY2015 well ahead of the pace in FY2013 and somewhat behind FY2014. Given all of the changes to the program — revised forms, more detailed data collection and new support for internal connections — USAC should be recognized for maintaining this strong pace.

The FCC’s E-rate Modernization Order made it a goal that the E-rate application process would be “fast, simple and efficient.” To promote this goal, the FCC set a September 1 deadline for decision letters and established metrics and reporting requirements to measure USAC’s progress.

How is USAC performing in pursuit of the goal? That question is not easy to answer. Because this is the first year of the reformed E-rate program, it is difficult to gauge USAC’s work. One approach to evaluating USAC’s performance would be to review the pace of funding decisions this year versus prior years. Using that approach yields a mixed set of results. As the graph below illustrates: 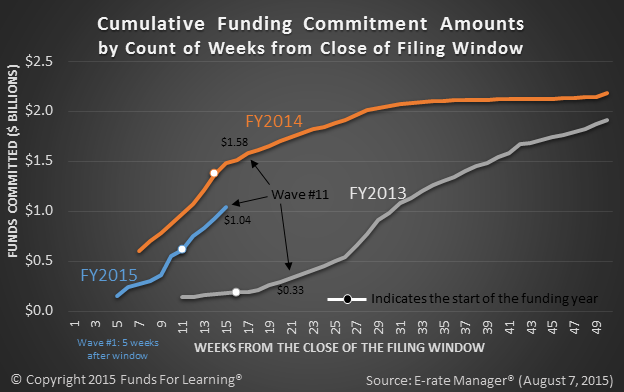 Fortunately, the graph of FY2015 commitments looks more like FY2014 than it does FY2013. That is good. Still, comparing this year with prior years does not tell the whole story. The E-rate program has changed significantly and along with it so have the requirements for USAC to issue decisions.

If we think of the old program as E-rate 1.0, then it is clear that FY2014 was the zenith of that old program. In FY2014, USAC issued the most FCDLs, in the shortest amount of time that it ever had… in the old program.

But now we are in a new program, E-rate 2.0, with new procedures and new eligibility rules. Because of that change, I would say that it is not altogether “fair” to compare prior years to this year. We can look to prior years for input and some general baseline data; however, for the most part, we should probably just let FY2015 stand on its own and set the stage for comparisons with FY2016 and beyond.

What will the pace of FY2015 funding decisions ultimately look like? Only time will tell; but so far, USAC is maintaining a good pace of funding commitments despite all of the additional application review work it is conducting.