Citing the importance of efficient program administration, the FCC this past week denied requests to extend the invoice deadline for 125 E-rate applicants. If you are an Applicant or Service Provider you might find yourself scratching your head right now wondering what just happened. Given the “efficiency” of the new EPC system, it feels as if the FCC is coming down hard on small applicants while giving USAC a pass on meeting its deadlines. If USAC gets extra time to do its job, why not extend the same grace to applicants?

Applicants and service providers need a functioning system to submit their E-rate forms and data. Most of them believe that the old system was much better than the current “streamlined” EPC.  When the FCC set out to modernize the E-rate program, it asked USAC to gather more data about the types of goods and services being used by applicants and, importantly, the price being paid. These goals appear to have been received by USAC as a directive to gather all data at the same time, in the same system. This resulted in the EPC system which has complicated the program and crippled the submission of accurate forms and data collection efforts.

To compensate for its malfunctioning system, the FCC extended the 2016 filing window deadline. This has given applicants additional time to navigate the “under development” EPC tool. We hope that this also results in more accurate data and application submissions — but with limited time to develop, test, and release system fixes, it is unlikely that much more than a bandage can be applied to EPC this year. This could have been avoided.

Making matters worse, the delay in the filing window impacts more than just the filing window. Applicants have limited resources to prepare E-rate paperwork. All of the extra time, energy and money being spent now pushes back other activities and will inevitably result in continued delays throughout the year.

The ripple effect of filing window delays and on-going EPC development will ultimately spill over to invoicing. Which brings us back to this week’s action by the FCC. The FCC has taken a “no mercy” position towards schools who miss deadlines or make mistakes. As if withholding payments from schools who are confused by the E-rate program somehow serves the public interest. We all make mistakes from time-to-time, and none of us are perfect.

Take, for example, the FCC’s Ada Order. That’s the Order they released denying schools and libraries the opportunity to collect their funds for making a mistake. Ironically, the FCC labeled the Order incorrectly. 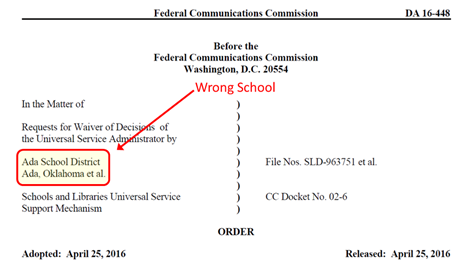 The Order is labeled the Ada, OK order. The only problem is that the applicant in question is in Ohio, not Oklahoma. Yes, there is an Ada Schools in Oklahoma. (Fortunately for them, they did not miss any deadlines.) Presumably, the FCC will fix their mistake and correct the Order. I am all for giving the FCC a little grace. Shouldn’t they do the same for schools and libraries?