Funds For Learning urges the FCC to move swiftly and to make permanent an enhanced Category Two budget system. The Category Two budget system has been very successful; and now, as several high-profile groups have already stated, the FCC should act promptly to build on the success of the past five years. The record is strong and very clear: raise the budget floor, increase budget factors, adopt consolidated budgets, establish a fixed five-year budget cycle, and allow applicants to purchase security and other critical network features.

Schools and libraries are counting on the FCC to move quickly. Otherwise, it will result in a late opening of the 2020 filing window. This would postpone projects and, for monthly recurring services, would result in lost opportunities to deliver fast Internet to students and library patrons. An extended period of deliberation would hurt our communities and penalize those individuals who have the most at stake. That is why the FCC must act now.

###
The earlier an applicant receives an E-rate funding decision, the better it is. Not only does the applicant put goods and services to work sooner; in some cases, the timing of a funding commitment decision determines if the requested goods and services will be used at all.

Recurring services are particularly sensitive to the timing of a decision letter. These types of services must be delivered between July 1 and June 30 of the funding year. Because schools and libraries often cannot afford upgraded monthly services without E-rate support, a late funding decision can doom a project. A review of funding commitment utilization rates confirms this. The chart and table below show the average utilization rate of committed E-rate funds from 2013 to 2017. (Those years were chosen because they are the five most recent years for which payments have been processed by USAC.)

One-time expenditures (a.k.a. non-recurring services) do not appear to be as sensitive to the timing of funding decisions. In fact, utilization rates for one-time purchases and services are remarkably consistent — around 83%, regardless of the funding decision letter date. This stands to reason because those funds are not required to be used within the confines of the funding year calendar. 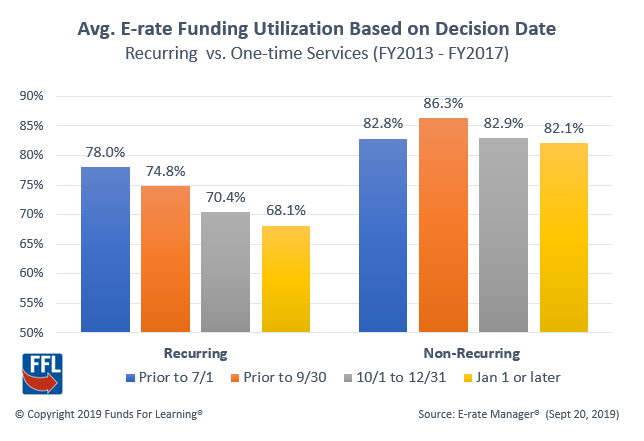 Timing matters and that is apparent when it comes to E-rate funding decisions for recurring services. Applicants need to know as soon as possible if they can expect to receive their E-rate discounts. Therefore, it is essential that the next E-rate filing window open on-time; and, for this to happen, the FCC will need to release its new C2 regulations this fall.
###
The E-rate program is bringing faster Internet to schools and libraries nationwide at a cost that is lower than ever before. E-rate supported networks are mission critical to organizations; and expeditious work by the FCC to finalize its C2 rules is needed to ensure that the FCC’s regulations are a catalyst for broadband… and not a network bottleneck.
Analysis