The U.S. Department of Justice (DoJ) announced on February 13th that AT&T Technical Services Corporation has agreed to an $8.26 million E-rate settlement due to anti-competitive bidding practices.

The U.S. Department of Justice (DoJ) announced on February 13th that AT&T Technical Services Corporation has agreed to an $8.26 million E-rate settlement due to anti-competitive bidding practices.  The DoJ reported that AT&T Technical Services Corporation “…claimed and received E-rate funds for goods and services that were ineligible for the program’s discounts, overbilled the E-Rate program for services provided and facilitated a payment or profit to the applicant from E-Rate funds.”  According to a Funds For Learning analysis this was tied to the procurement with the Indiana Intelenet Commission. 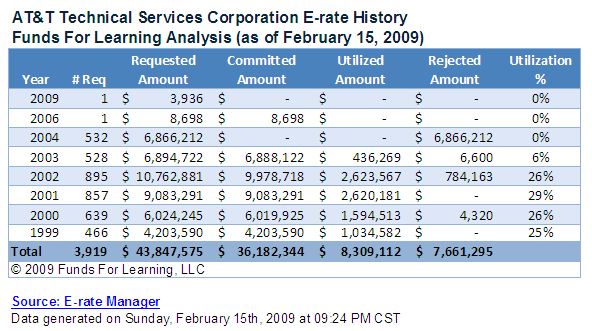 The E-rate regulators include the Federal Communications Commission and the Universal Service Administrative Company and they are continuing to spend more resources auditing program beneficiaries.  In fact, Congress last year Congress gave them the authority to use over $20 million from the Universal Service Fund directly for further oversight and to conduct even more scrutiny from stakeholders to evaluate how program funds are being utilized.  They are also working with the FBI and DoJ on on-going investigations.

Information about the Indiana Intelenet Commission can be found on the Indiana Department of Education website.

An AT&T spokesperson issued the following statement related to the settlement:

“The AT&T family of companies has been participating in the E-rate program for schools and libraries since the program’s inception in 1998. We are proud of the work we do to keep our nation’s schools and libraries connected under this program. And we are committed to helping ensure that all eligible K-12 schools and public libraries have affordable access to advanced telecommunications services.

This voluntary settlement involves services provided to the Intelenet Commission prior to the merger between SBC Communications and AT&T Corp. The settlement does not include any finding that AT&T has broken any laws, rules or regulations under the E-rate program.

We have settled this case so that we can focus on providing high-quality services to the communities we serve under the E-rate program and we remain fully committed to this endeavor.”