One event is the FCC releasing a Public Notice including the final Eligible Services List (ESL) for Funding Year 2010. FCC rules (in 47CFR54.522) dictate that at least 60 days must pass after the final ESL is released before the Form 471 Filing Window opens. The FCC will probably waive this rule, allowing the window within the 60-day final ESL notification period.

Another event will be the announcement of the exact dates of the Form 471 Filing Window. While there is not a mandate of advance notice to stakeholders about the window opening, USAC has traditionally given some advance notice.

During a USAC meeting in October, dates mentioned for the filing window were December 1, 2009 through February 15, 2010. Funds For Learning reported these dates on our website and in our November newsletter, as they were brought up at the meeting. We are currently past December 1, and February 15 is President’s Day–a Federal holiday. The dates mentioned at the meeting were probably timeframes and not specific dates.

I’ve put together a list of the announcement, opening, and closing of the Form 471 Filing Window for the past few years: 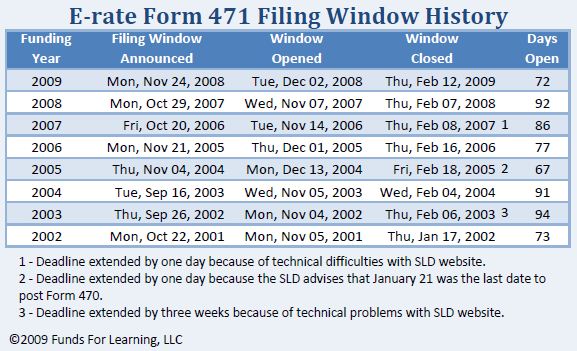 From this, we can glean that the Filing Window will probably close in early or mid-February. As always, Funds For Learning will report the final dates when they become available. If you’d like to receive an e-mail notification from us when they are announced, you can sign up for our E-rate news alerts and newsletters .