Are You Getting an Early Start?

In any given funding year, approximately 35,000 Form 470s are filed. As a general rule, most of those 470s are posted in between early October and mid-January. However, it appears that many applicants may be getting a jump on the procurement season for FY 2011. I have noticed that within the first six weeks of the 2010 funding year (July 1, 2010 – August 17, 2010) 854 Form 470s were filed. That is more than double the number of Form 470s posted during the same timeframe last year, and it appears that many applicants are posting 470s earlier and earlier each year. 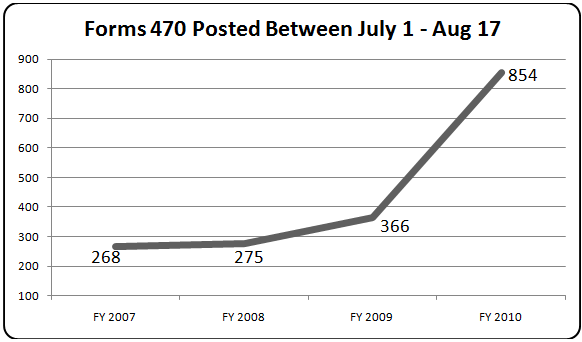 I’m a bit perplexed as to why there has been such an increase in early Form 470 filings. I know that the FCC has released several NPRMs as of late, seeking comment from stakeholders on a variety of subjects including possible Form 470 revisions. It could be that school officials would prefer to use the Form 470 they are familiar with, rather than taking their chances with a new form that may have changes and/or ambiguous instructions that could cause them to make mistakes. Another possible explanation could be the SLD’s stated desire to close the Form 471 window earlier in the year and require Item 21s to be submitted at the same time as the Form 471, prompting applicants to get started on the process earlier in order to have adequate time to complete their applications.

No matter what the cause, the fact remains that applicants have already begun to post Forms 470 at a record pace. E-rate service providers would be well advised to pay attention to Form 470 postings during this time of the year in order to prevent missing out on large opportunities that may be getting an early start!