Waiting to File? Five Tips for the Form 470

After reporting on the increase of Forms 470 for FY2011 filed between July 1 and August 17, it appeared that applicants were beginning to get a head start on the procurement process. However, with the release of the Sixth Report and Order that announced the new Forms 470 and 471, coupled with the later than usual filing window, the number of Forms 470 filed during the first 5 ¬Ω months of FY2010 is down nearly 25% from FY2009. 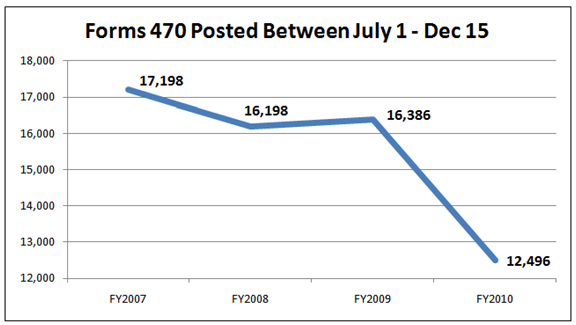 With approximately 35,000 Forms 470 filed for any given funding year, it appears that over half of the forms for FY2011 are still to come. For those of you that still need to file, Funds For Learning has put together five simple reminders to assist you as you begin the procurement process for FY2011.

Do NOT Involve Service Providers

The quickest and surest way to mess up your Form 470 is to involve an existing or potential service provider with the creation of the form or the selection of service providers. Applicants should not involve service providers in the preparation or posting of the Form 470, or allow them to act on their behalf on any matters related to the competitive bidding process.

Include All Applicable Services

Simply put, if the service is not on the Form 470 (or a previous Form 470 in the case of multi-year contracts), it cannot be included on the Form 471. Applicants should be certain to include that the desired services, including capacity and quantity, are addressed on the Form 470.

Check, Re-check and then Check Again

This is good advice for E-rate in general, but especially for the procurement documents. Before submitting the Form 470, make certain that you have included the services you want to seek reimbursements for in FY2011.

Remember to Certify the Form

If you have, or plan to submit the current Form 470 remember to certify as soon as possible. If you have not certified the current form by the time the new Form 470 is available, you will have to resubmit and re-certify the form, and wait another 28 days before signing any contracts. If you wait to file the new Form 470, be certain to certify before February 24 in order to run an open and fair competitive bidding process before the close of the window on March 24.

Wait at Least 28 Days Before Signing a Contract

Forms 470 must be posted on USAC’s website for at least 28 days before applicants can enter into any contracts with service providers. If you release an RFP associated with any of the procured services listed on the Form 470, the RFP must be open for at least 28 days as well.