The Universal Service Administrative Company (USAC) released their Quarterly Report on November 2, 2011 and mentioned that they will continue to fine tune their oversight of program beneficiaries and contributors in order to take even more steps to guard against waste, fraud and abuse. The reports highlights that USAC has strengthened their “audit and investigative techniques.”

The report states both the Beneficiary and Contributor Compliance Audit Program (BCAP) and the Payment Quality Assurance Program (PQA) have been implemented. There are currently 35 BCAP audits that are scheduled, 9 are in progress and 2 have already been completed. Based on early analysis from the PQA program which is designed to assess the amount of improper payments, USAC estimates that the improper payment rate is 0.94% with an estimated improper amount of $21.9 million. USAC emphasized that based on their evaluation, improper rates are “significantly lower than the levels reported under the FCC Office of Inspector General Audit Program…”

The FCC's Third Report and Order directed USAC to apply unused funds to increase the amount of available funding for a particular funding year. Every quarter, USAC is required to revise their estimates of the unused funds. In the last several funding years, the FCC has rolled over billions of dollars in unused funds. Here is a breakdown of the rollovers since 2007: 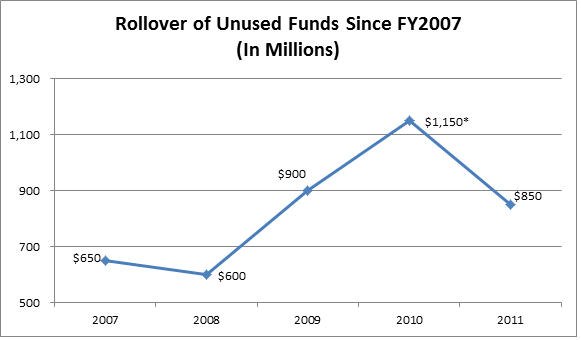 *USAC Originally rolled over $900M, in what is known as the Funds For Learning Rollover Order, on August 22, 2011, the Commission instructed USAC to carry forward an additional $250M in unused funds to Funding Year 2010 for a total of $1.15B.

USAC reported that as of October 31, 2011, $50 million is available for rollover for FY 2012. Over the course of the next 8 months, this will continue to increase. The rollover amount has a direct impact on how many Priority Two projects will ultimately receive E-rate support.

The quarterly report also highlighted the number of pending applications (Forms 471) remaining for each funding year. As of September 30, 2011: 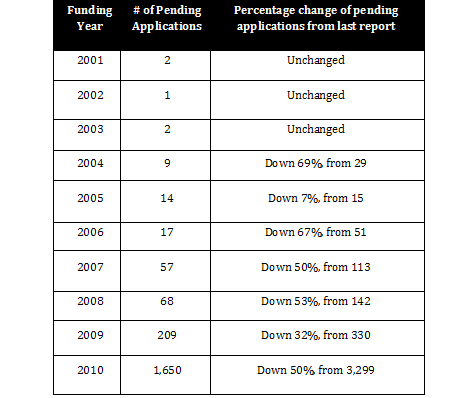