On August 2, 2013, the Universal Service Administrative Company (USAC) released their quarterly report for the fourth quarter of 2013. The Schools and Libraries Division (SLD) estimates that they have $350 million from previous years that can be carried forward into Funding Year 2013. This is a decrease of $100 million from the last quarterly report, as USAC received FCC authority to use rollover funds to cover priority one funding commitments for FY 2013.

The requested amount for priority one services in FY 2013 exceeded the entire funding cap. Some funds from previous years need to be available in order to pay for possible pending appeals or invoices that still may need to be paid. The SLD estimates that they can carry forward the following dollar amounts from these funding years:

The quarterly report also highlights the number of pending applications (Forms 471) remaining for each funding year. As of June 30, 2013: 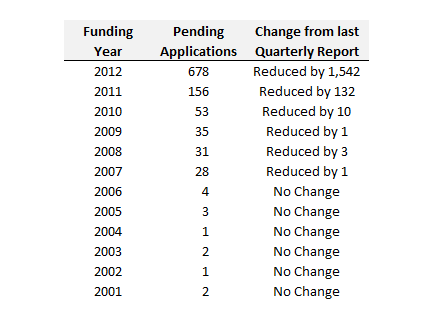