There is a lot of discussion right now about the math behind FCC Chairman Wheeler’s proposed Category 2 funding cap system. Under this proposal, the E-rate program would remain a discount program, providing Category 2 support to all schools, but discounts would be capped for each applicant based on their discount rate and enrollment. Wheeler’s new approach would more equitably distribute E-rate discounts by reinstating a discount-based, sliding scale of support for internal connections and basic maintenance. In short: the nation’s most economically challenged schools would receive the most support – yet all schools would receive some support for their on-campus connectivity needs.

As shown in this Funds For Learning analysis, under the Wheeler method, but using the current discount matrix, schools in the 80% to 90% discount band would, as a group, qualify for discounts of up to $481,035,797 in Category 2 discounts in 2015. That is a far cry from the $0 these same schools received in 2013. 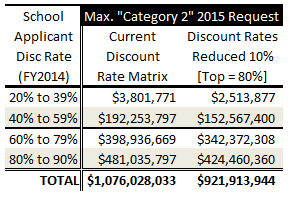 The proposal being floated goes a step further and reduces discount rates, lowering the top rate from 90% to 80%. Under this revised Category 2 discount matrix, the top discount-rate schools would still, as a group, qualify for up to $424,460,360 in E-rate discounts.

It is time to retire the FCC’s Priority system and replace it with something that is more predictable and equitable. On its best days, the Priority System rarely supported on-campus connectivity for more than a small percentage of schools. Eliminating the priority system and replacing it with the new Category system is definitely a step in the right direction.