The end of July seemed pretty discouraging to me. Only $150 million in funds had been committed for the current funding year; and, it was announced that $1.9 billion in available funding would be used to reduce the USF contribution of service providers. In short: not much new funding, and old funds that could have really helped a few years ago are, instead, evaporating in a strange, accounting sort of way. As I said, it felt pretty discouraging.

But August is a new month, and with it has come some positive news. This has given me a fresh, more encouraged perspective.

A new vice-president in charge of the program, Craig Davis, started August 1. He takes the spot that had previously been held by Mel Blackwell. This ends several months of uncertainty about who would be leading up the program. Now, with that question answered, everyone’s focus can (and should) shift to enhancing the E-rate program’s support of schools and libraries nationwide.

The simplest measure of E-rate program success is whether or not schools and libraries are receiving discounts. It’s easy for me to focus on other metrics, like the pace of applicant Form 471 applications or USAC’s funding commitments. Those are both important items to watch — but they are important only because they are leading indicators of future funding disbursements.

When it comes to the bottom-line of the E-rate program, there is one number to watch: disbursements. Are the funds being used? Are schools and libraries getting the benefit of the E-rate dollars that have been approved for their use? By that measure, things are holding up pretty well. Since the funding year started, $214.3 million in disbursements have been authorized. 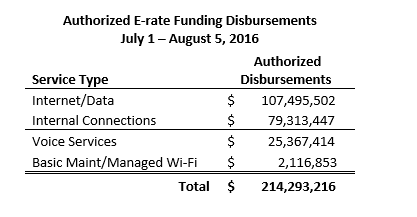 Over the past three years, monthly disbursements have averaged $188 million. Based on the current trends, there is nothing to suggest that there has been any major disruption to the payment process… and, that is an encouraging sign. 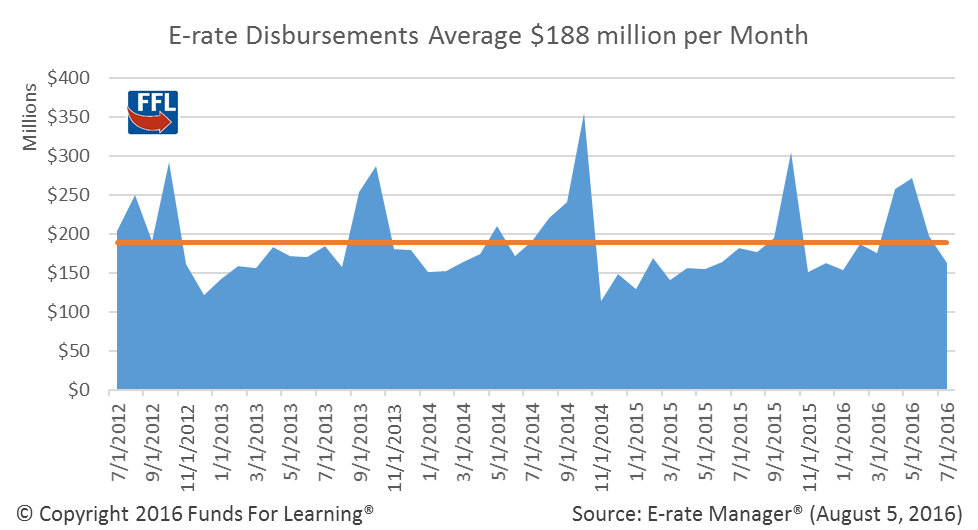