The count of applications processed and E-rate funds committed for FY2016 remains very low when compared to the past nine funding years. As of mid-September, twelve weeks into the funding year, $578 million in funds had been committed. At the same point in 2015, $1.778 billion had been committed — more than three times as much money. In fact, the average committed amount in mid-September for the previous nine years is $1.179 billion. Of course, funding year 2016 is not the only year in which commitments have been slow. Funding year 2013 was another in which funds were committed sluggishly. See below. 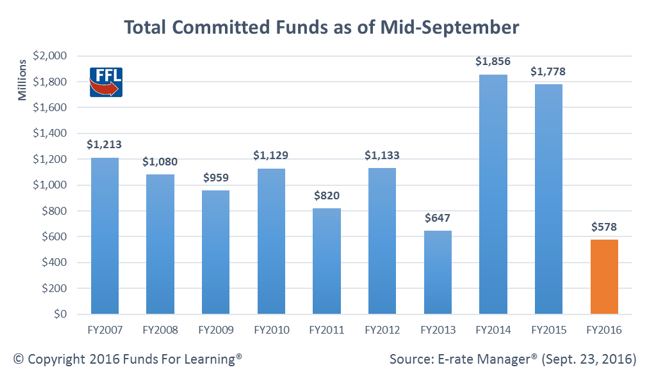 Having funds committed prior to the July 1 start of the funding year allows applicants the option to have their goods and services discounted rather than seeking reimbursements later. Prior analyses have shown that funding dates matter and that there is a correlation between the decision date and the utilization of E-rate discounts: the later a decision the less likely an applicant is to utilize all of the funds committed to them.

Applicants who have not yet received a funding commitment decision letter should contact USAC and inquire as to the status of their application(s).