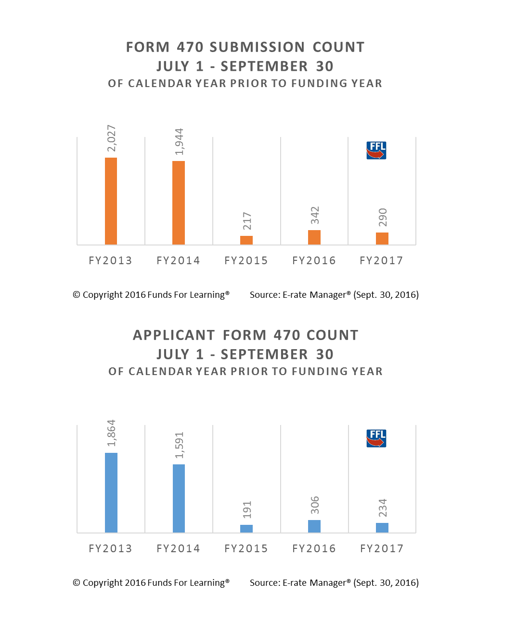 Form 470s serve as public notice of an applicant’s intent to seek bids and proposals for specific E-rate eligible goods and services. Each Form 470 must be publicly available for a minimum of 28 days prior to the award of a contract. With very few exceptions, all E-rate funded contracts must go through the Form 470 posting process.

In FY2013 and FY2014, about 2,000 Form 470s were posted in the July to September timeframe. (Earlier years had about the same number posted.) But, in recent years, the count of Form 470s posted in the July to September timeframe has been much lower. FY2015 holds the record for a slow start to the bidding season: only 217 Form 470s were posted by September 30. This low number is generally considered a result of the FCC’s E-rate Modernization Order. It was not until the end of October that the FCC released the brand new Eligible Services List, after which the count of Form 470s quickly increased.

For FY2016 and FY2017, most observers believe the slow pace of Form 470s is attributable to the EPC system. Applicants have struggled getting accounts setup, and, more recently, have endured a series of system outages.

Despite the current EPC-related challenges, applicants are encouraged to begin their competitive bidding process now. Getting Form 470s posted and contracts awarded sooner, rather than later, provides more time to properly prepare and submit funding requests during the Form 471 filing window that will open in the early part of next year. 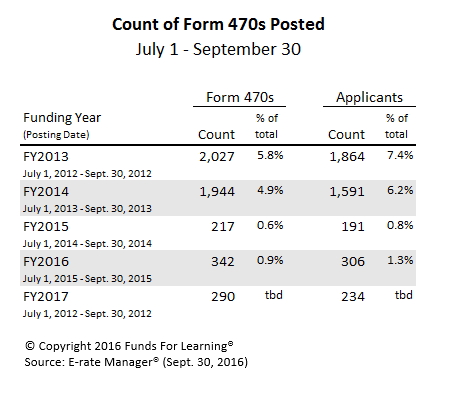