The Universal Service Administrative Company (USAC) reported to the Federal Communications Commission (FCC) that they estimate that $4.3 billion has been requested for the 2008 funding year which is approximately $620 million increase from the previous year.  The $4.3 billion would be the most requested since 2003. 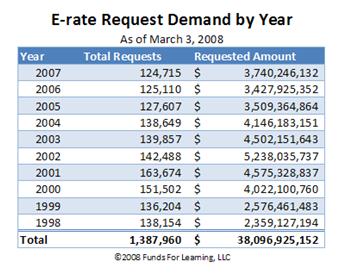 USAC further reported that requests for priority one services (telecommunications and Internet access) have increased 9.1% and the internal connections requests have increased nearly 24% much of that at the 90% discount band from FY 2007.  USAC is analyzing the data to understand the increase. Based on the “2-in-5” rule, applicants can only request internal connections at a particular site twice every five years.  The rationale was that more applicants over time would get access to the priority two services than have in previous years.  The reason for the large increase in internal connections request could be that many applicants are planning on large technology upgrades this year and are planning on using one of the years they have available for this.

Further detail about the FY 2008 demand estimate can be viewed here .