We know that this influx of traffic the last week has negative effects. The SLD website slows down and logging in becomes more difficult. Stress levels rise, and in some cases, deadlines are missed. But this isn’t a new phenomenon. Procrastination in the program has been around since the beginning, yet applicants still wait. The potential of negative consequences aren’t enough to change behavior and spur earlier action.

So how about the potential of positive consequences?

According to a recent Funds For Learning analysis, there is a strong correlation between the time the applicant files, and the date of the Funding Commitment Decision Letter. 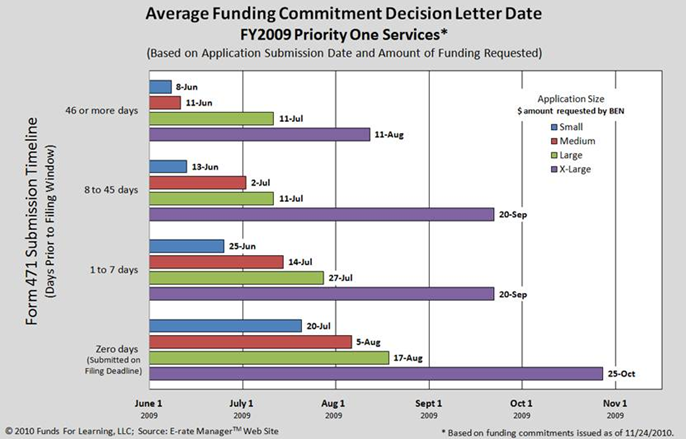 Applicants that requested less than $15,000 in FY2009 and submitted their applications 46 or more days prior to the filing deadline (Feb 12, 2009) received their P1 FCDLs faster than anyone else (on average June 8, 2009). A similar applicant who waited until the filing deadline to submit their application received their P1 FCDL on July 20, on average.

The applicants with the most to gain from early filing are the larger applicants. Large applicants that file outside of 46 days from the filing window on average receive their FCDL a month before than those that file within 45 days, and over 2 months before those that wait until the deadline.

We still recommend that the filing window be reduced to 45 days, closing on approximately February 26th, as this would reduce many springtime scheduling conflicts (e.g. many schools have spring break in March) while still giving all applicants ample time to complete their Form 471(s) and giving USAC the time it needs to start reviewing applications. However, this seems unlikely for the FY11 filing window, so we highly recommend for applicants to file early and reap the early FCDL rewards.