Forms 471: Waiting Until the Day After Tomorrow

Oscar Wilde once said, “I never put off till tomorrow what I can do the day after.” It appears that many E-rate applicants share this philosophy.

If you have attended USAC training, you have undoubtedly seen the line graph representing the number of Forms 471 filed during the filing window. The line travels to the right of the axis at a slow and steady pace only to shoot up at a near 90-degree angle at the end of the chart, signifying the onslaught of forms filed during the last week, and especially, the last day of the filing window. Anyone that has tried to certify the Form 471 online the last day can believe the presented figures, as the speed of the website slows to a crawl as the clock continues at its steady pace to 11:59 EST.

Should applicants be allowed more time to fill out the form? Would a longer window prevent the mass chaos of applicants at the filing window deadline? According to our analysis, probably not and in fact, having an extended window may promote the opposite.

The filing windows for FY08, 09 and 10 have been opened for 78, 73 and 78 days respectively. This is enough time for applicants to gather the appropriate paperwork, sign contracts, and fill out and certify the forms. Even if an applicant waited until the day the window officially opened to begin filing Forms 470, they would still have 50 (or close to it) days to complete the form after waiting the required 28 days.

So when do most applicants file when the window is spread out over 70 or more days? According to the below Funds For Learning analysis based on FY09, almost all applicants would still wait to file during even if the window was reduced to 45 days. 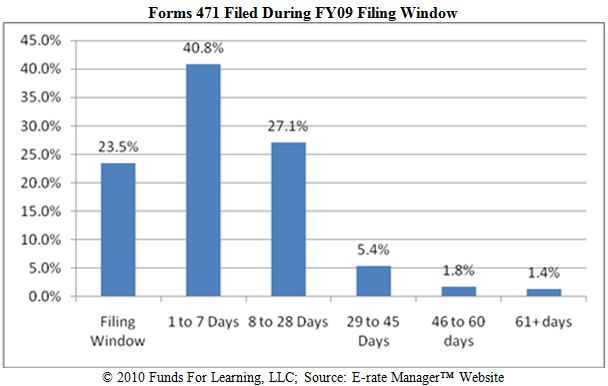 With 97 percent of applicants waiting to within 45 days of the filing deadline, why keep the filing window open for over 2 ¬Ω months?

As Funds For Learning has discussed before, the most significant factor in predicting whether or not an E-rate funding commitment will be utilized is its funding date. Applications that are funded before the start of the funding year have the highest utilization rate. Therefore, it is in everyone’s best interest to give USAC ample time to review as many applications as possible before July 1.

I recommend that USAC open the filing window January 10 and close it February 24. This is enough time and a February deadline will also reduce many springtime scheduling conflicts (e.g. many schools have spring break in March.) This will give all applicants ample time to complete their Form 471(s) while giving USAC the time it needs to start reviewing applications.