When Will FY2011 Funding Start?

On May 26, 2010, USAC released Funding Year 2010 Wave 1, a $429 million funding wave that was the largest in the history of the E-rate program. One year later, applicants are still waiting for the first wave of FY2011.

Figure 1: Days From Close of Window To First Waves 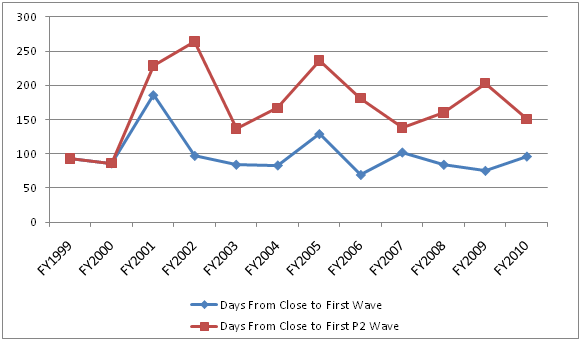 When released, the first funding wave is expected to be large, in part because of increased demand for E-rate funds. The SLD previously announced the FY2011 demand estimate of $4.31 billion, a 10 percent increase over FY2010. Of the $4.31 billion demand, Priority One services (telecommunications and internet access) and Priority Two services (internal connections and basic maintenance) constitute $2.173 billion and $2.137 billion, respectively.

A recent change by the Federal Communications Commission allows the amount of funds available to be adjusted for inflation. In FY2011, the SLD can disburse $2.27 billion.

At first glance, it would appear that the majority of the funds available will be absorbed by Priority One requests. However, there are few things to keep in mind. Since FY2007, an average of $147.5 million has been denied each year for Priority One services, while from FY2007-2009 on average $185 million was denied at the 90 percent level for Priority Two applications. This reduction in funding requests during the application review process, combined with the rollover of undisbursed funds from prior years, will allow for the funding of some Priority Two applications in FY2011. But it will likely be 6-to-12 months before we know with any certainty how much money will be available for FY2011 Priority Two requests. (To put this delay in context, the FCC is still calculating the final amount of FY2010 money that is available for commitment.)