Who Will Take a Stand for Pelican City School District?

In the recent Senate hearing on E-rate 2.0, Senator Begich of Alaska asked about the fate of E-rate funding for Pelican City School District, a small school with less than 20 students in rural remote Alaska. Senator Begich was concerned that Pelican City, which qualifies for an 80% discount, might lose out on E-rate support if the FCC adopted the Funds For Learning E-rate 2.0 proposal. (See his question at about the 2 hour mark.) The Funds For Learning (FFL) proposal calls for budget caps that encourage cost-effective purchases and guard against wasteful spending. The caps are tied to each applicant’s size, E-rate discount rate and location.

The good news is that Pelican City won’t lose out. The FFL proposal has specific safeguards for small schools – minimum budget floors – and for rural remote schools – a high-cost multiplier that doubles an applicant’s funding cap. As shown below, in 2013 Pelican City requested $11,011.20 in E-rate discounts. Under the FFL proposal, they could have requested up to $77,660.80 in E-rate discounts, using the difference to purchase Wi-Fi or other necessary internal connections. 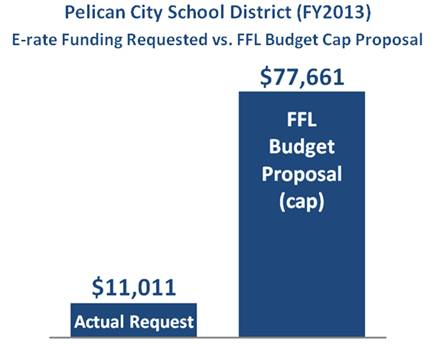 The facts are clear. Without change, places like Pelican, Alaska, will continue to get short-changed by the current FCC priority rules. The E-rate program needs to protect Pelican City Schools and every other school like it.

The Funds For Learning E-rate 2.0 Proposal levels the playing field and returns the E-rate program to its roots: allowing schools to plan for technology based on their own needs and priorities, while ensuring that the poorest schools and rural schools receive the greatest benefit.