E-filing – And Then Came the Internet

Last week, Funds For Learning® proposed a new e-filing standard to help modernize the E-rate program. E-filing would allow E-rate applicants to submit their paperwork electronically without having to go through the USAC web site. This would be a significant change – and improvement – to the E-rate program.

Like all change, no matter how good it might be, the thought of altering our current, or even more accurately, familiar E-rate ecosystem will cause varying levels of stress and anxiety. Isn’t it better to just stick with the status quo? At least with the current system we already know what to expect from the problems that exist today. We don’t know with certainty what impact e-filing would have on all of us.

These thoughts remind me of concerns that I had back in 2001 when faced with the threat of a similar transition. Let me explain.

Sitting on the table in front me are three E-rate Advisor™ CD-ROMs. Back in 2000, Funds For Learning® sold this software to help schools and libraries prepare their E-rate paperwork for a brief two years. 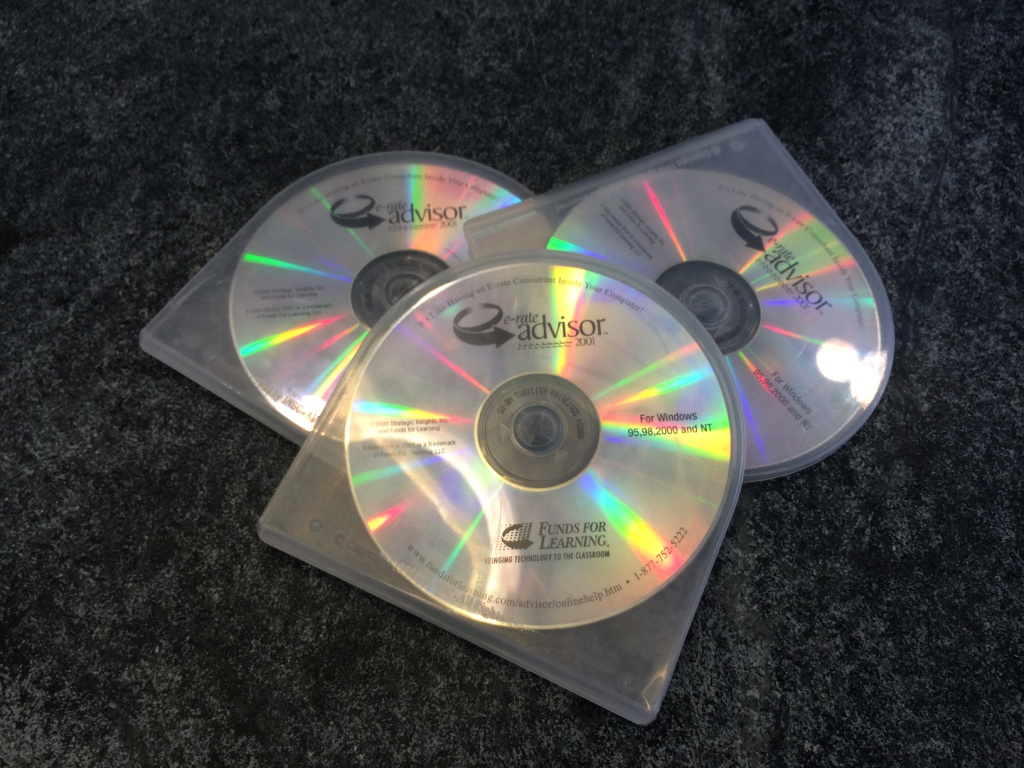 It was exhilarating working with the developers to design software that could be installed and work bug free on Windows 95, 98, 2000 and NT machines.  The software was well-received — we sold over 3,000 copies both years – and E-rate applicants told us that they appreciated using it.

Part of me would have liked to have kept producing the software. But my memories are probably rosier than reality was. It was stressful locking down the software code and sending off the master disk to the CD replicator; printing forms to various types of printers was always an issue; and one year there was an unannounced form change that came down from the FCC after we had shipped the CDs.

And then came the Internet.

Like it or not, the times changed, and Funds For Learning® had to change along with them. E-rate Advisor 2001™ was the last CD software that we published… and I am glad that we made the change.

We quickly made the transition to our web-based E-rate Manager® service. It pushed us out of our comfort zone. We had to adjust the way we worked and we had to give up some things that we were comfortable with. There were a few things, like the preliminary planning we had done for E-rate Advisor 2002™, which we simply had to abandon.

But something interesting happened during this process. As clichéd as it sounds, we didn’t lose an opportunity, we gained one. What at first felt like giving up, turned into progress. All of a sudden we didn’t have to ship out CD-ROMs. We didn’t have to physically mail software patches to customers and we could more easily accommodate changes to the FCC forms. Although I was sad that E-rate Advisor™ was gone, I quickly came to appreciate that our web-based E-rate Manager® service was much better for everyone involved.

The online tools developed by USAC are intended to meet the basic needs of applicants, and USAC should be applauded for their work. On the other hand, USAC’s primary purpose is the successful administration of the Universal Service programs; not providing comprehensive, robust, and innovative online solutions for E-rate stakeholders. That is what E-rate Manager® is designed to do, and that has been its primary mission for the past thirteen years.

Quite frankly, the lack of an e-filing standard has been good for Funds For Learning®. We don’t need e-filing because users of E-rate Manager® already enjoy e-filing via our proprietary one-of-a-kind system that “manually” enters all of the form data into the USAC system. There is nothing else like it. We haven’t had to use the USAC website to submit paperwork for years, and our award-winning system works really, really well; but don’t take my word for it. Here is an excerpt from an unsolicited email that we received recently:

In FY 2014, I used E-rate Manager to create my Form 470s and Form 471s and the form creation process was so much simpler and less stressful than using the USAC’s online system and would recommend that my colleagues in other school districts use E-rate Manager to manage their E-rate going forward. [The entire note is reproduced below.]

Disclaimer: I am apprehensive about there being an open e-filing standard for E-rate forms. However, maintaining a competitive advantage for our business is not an appropriate reason to ignore this present reality. At this point, adopting an e-filing system would not just be leaps and bounds more effective for E-rate stakeholders, it would also allow USAC to better focus on its responsibility to administer the program in its entirety. As I said to the FCC in our formal e-filing proposal, “standards and technologies that are now common-place could easily facilitate the electronic submission of forms and the transfer of data to and between third parties and USAC.”

This brings me back to thinking about 2001. Funds For Learning could have ignored the realities of cloud-based services that were quickly evolving. We could have held on to our E-rate Advisor™ CD-ROMs for a few more years. But in doing so we would have missed a tremendous opportunity. The time was right for change.

The same holds true today. It is time to once again evolve the E-rate program. The time is right for e-filing of E-rate paperwork. It’s just that simple. I don’t know what it will look like exactly, or precisely how it will change things — because I am not confident in my ability to predict the future with that level of specificity! But I am confident that now is the time for e-filing. Please join us in this effort. Let the FCC know that you support a standard for electronic form and data transmission.

In FY 2014, I used E-rate Manager to create my Form 470s and Form 471s and the form creation process was so much simpler and less stressful than using the USAC’s online system and would recommend that my colleagues in other school districts use E-rate Manager to manage their E-rate going forward.

We have several audits.  Annually we have a financial audit.  The school district hires an independent audit firm to audit our general finances.  They cover everything from time cards, supplies, and benefits to building new buildings, E-Rate, student information reporting, business systems and procedures.  Additionally we will have a state auditor general audit from time to time.  During these audits the auditors will select several random samples from each area and each department.  For instance, the auditors will pick five random technology purchase orders.  The ones selected could range from the department ordering a replacement keyboard to buying $250,000 in laptops.  The auditors review each of these selected transaction to ensure the district followed federal, state, and it's own policies and procedures.

How this ties to E-Rate Manager.  Because E-Rate provides reimbursement for all of our communications, and on the rare occasion we have priority 2 funding, the dollar amounts quickly rise.  The auditors will pick several PO's that are on the E-Rate program and we must provide much of the same information as we would in an E-Rate audit:  FCDL, vendor selection criteria, RFP documents, PO procedures, reimbursement auditing, etc.  When the auditors pick the FRN's they are auditing, I log into E-Rate Manager, print a couple of the FRN reports, and the documents in the archive and send it to the auditors.  It is easier than digging through a binder trying to piece together all of the information they need.

In the case of a state audit, we have to show how we are handling the reimbursements of a BEAR form.  When USAC is slow to approve funding, we have to reserve money from one budget to cover money in another budget.  The [School District] used the reports from E-Rate Manager to show our due diligence in getting the money from late funding.  This meant the district did not need to hold back close to $70,000 from an already tight budget while the BEAR forms were being processed.

The two school districts I work for value the E-Rate Manager program and what is does to the point; it was not even a discussion when we created a consortium.  We purchased E-Rate manager for the consortium for one 471 and two FRNs because it is so important for us.