The larger the applicant, the less they pay for telecommunications and Internet access. That is the clear message that emerges from the E-rate funding requests submitted by schools in 2014. Single-site schools, such as public charter and private religious schools, pay out-of-pocket expenses that average $1.79 per student each month. At the other extreme, large school districts with more than 50,000 students pay just $0.75 per student each month, almost 60% less. 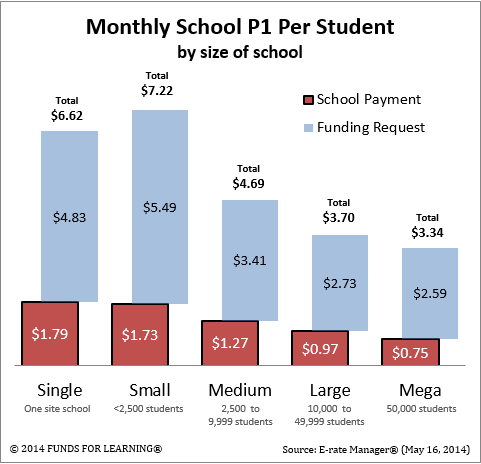 Applicant size is by far the strongest predictor of what a school will pay out-of-pocket each month for telecommunications and Internet access; discount rates are the second largest contributor to variations in expenditures; and, of the three factors in this analysis, applicant location has the least significant impact on what schools pay each month. 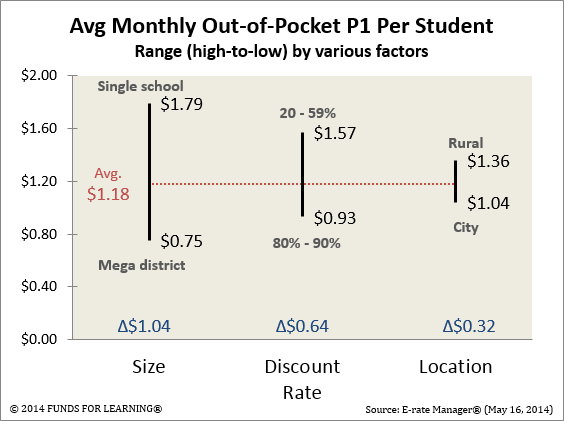 NOTE: These charts do not include the data for New York City Board of Education or Remote Rural Alaska schools.

Scale certainly has a significant effect when it comes the price of telecommunications and Internet access. Having more sites allows for fixed costs to be distributed more broadly, and often brings along with it lower per unit prices. Since its inception, the E-rate program has supported large E-rate applicants, including consortium based on the notion that larger sized applicants can command more cost-effective services. The data from the FY2014 school applications certainly supports this hypothesis.

Next Week: Part 4 of our analysis will look at the combined impact of school size, discount rate and location on the telecommunications and Internet access services requested by schools in 2014.