And Funding for All

This past week, the FCC authorized USAC to fund all qualified 2016 E-rate applications. Four years ago, this option did not exist. This incredible milestone is a victory for our nation’s schools and libraries.

In the fall of 2012, I was running around Washington, DC, showing people this chart (along with a bunch of other charts and statistics. Here are a few excerpts.) 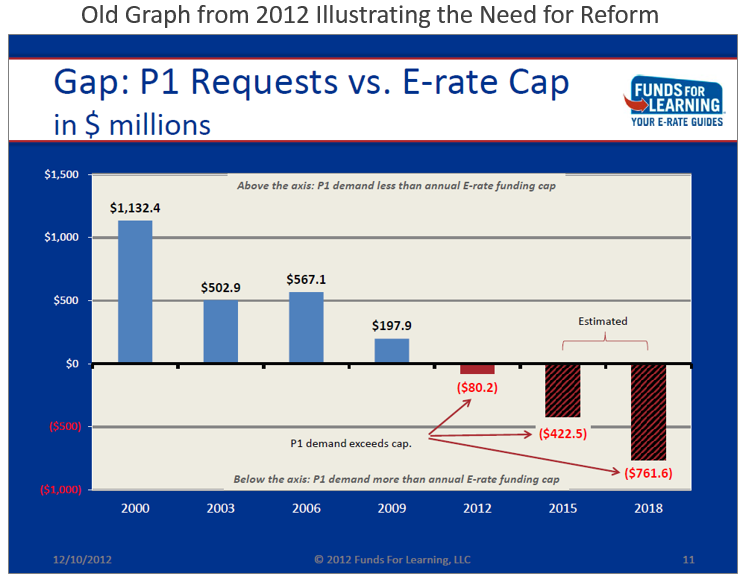 The chart illustrated the fact that the demand for “Priority 1” E-rate services in 2012 had, for the first time, exceeded the annual cap by $80 million. Applicants requested more money for voice, Internet, and data services than could be collected by USAC. Fortunately, there were unused funds from prior years that could be used to cover the gap in 2012; but the situation was clear: there were not going to be enough funds to cover Priority 2 services in 2013, and, by 2015, the FCC would need to ration out discounts even for Internet access and telecommunications services.

The E-rate program was facing a serious crisis.

Now, four years later, the world looks quite a bit different. Funding has been restored for internal connections and the E-rate program is no longer staring down a fiscal cliff. In fact, the situation is so much better that this week I nearly took for granted the fact that all applications would be funded. We are very fortunate to be in this situation.

Over the next few weeks, we will be sharing with you our initial analysis of the 2016 demand, beginning with a look next week at Category 1 requests. We will also be sharing with you our ideas for how the E-rate program can be further refined and enhanced to more effectively fulfill its mission. (Note to applicants: please complete the survey. Results will be submitted to the FCC.)

The E-rate program, while not perfect, is stronger than it was four years ago. Nothing demonstrates that more than the FCC’s actions this week. For the second year in a row, all eligible requests will be funded. Congratulations to all of the schools and libraries who can now look forward to receiving their much needed E-rate support!