The E-rate program ensures access to affordable and cost-effective broadband connections in schools and libraries according to a majority of applicants responding to our recent nationwide survey.

The FCC set three goals to measure the success of its E-rate Modernization efforts:

In our survey, we asked applicants if they agreed or disagreed that the E-rate program was achieving each of these goals. As illustrated below, there appears to be strong agreement that the first two goals are being achieved. 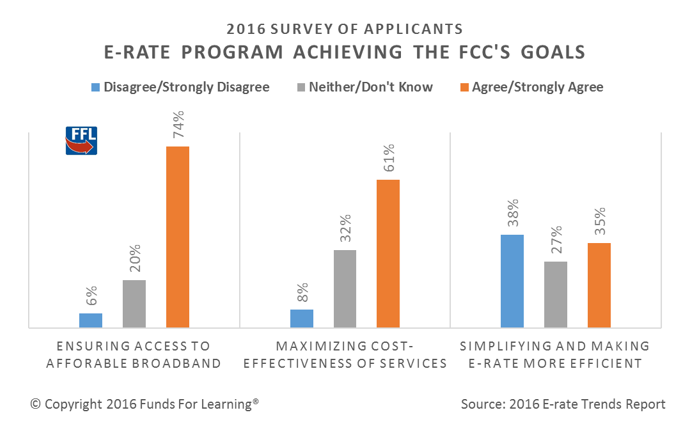 There is significantly less agreement regarding the third goal, with only 35% of survey respondents indicating that the E-rate had been simplified and made more efficient. This response is most likely due to the new USAC EPC online portal. A majority of survey respondents indicated that EPC had made the E-rate application process more difficult. These challenges have been compounded in recent weeks by ongoing system outages.

All of the survey responses are available here. The survey had more than 1,000 responses with an estimated margin of error of +/- 3%.