The E-rate program has been largely responsible for connecting our nation’s schools and libraries to the Internet; but those connections have been walled-off from the rest of the community by FCC regulations. As noted by Pew Research and others, there is a growing gap between those who have fast Internet (and the devices to use it), and those who don’t. For students, we call this the Homework Gap.

Unfortunately, there stands today a regulatory wall that prohibits the use of E-rate funded networks by students who are off-campus. As you might imagine, there was good intent behind this regulation (i.e. guarding the financial integrity of the program). But those safeguards can still be achieved, while, at the same time, opening the door for schools and libraries to open their networks to the community. That is the proposal that the FCC is considering right now.

Stop. Let’s get real. Some of this can be a little difficult to conceptualize. At least it is for me, and I do this for a living! Let’s try again with the “a picture is worth a 1,000 words” approach. See illustration below.

The E-rate funding program provides support for student “A” to have a Wi-Fi signal on school grounds; however, if student “B”, across the street at home, were to use that same Wi-Fi signal, the school would be required to allocate out a portion of its E-rate support and return the funds – even though it doesn’t cost the E-rate program any more money for the off-campus student’s connection.

In the real world, it’s a little more complicated than that, but this is basically what we are talking about. Can the families in the neighborhoods near schools and libraries connect to the Internet connections that are right there, across the street, sitting idle all evening long?

It would be one thing if this was an academic exercise. But this isn’t a theoretical question for a college course. We are talking about millions of real life, low-income families that could benefit from this access.

Don’t believe me? I’ll prove it to you. Using data from the Department of Housing and Urban Development, combined with our own E-rate Manager® database, Funds For Learning has calculated the distance from every public housing development in the United States to the closest school or library with an E-rate funded Internet connection. Guess what we found? Almost a million low-income inhabitants within a quarter mile of a school or library. 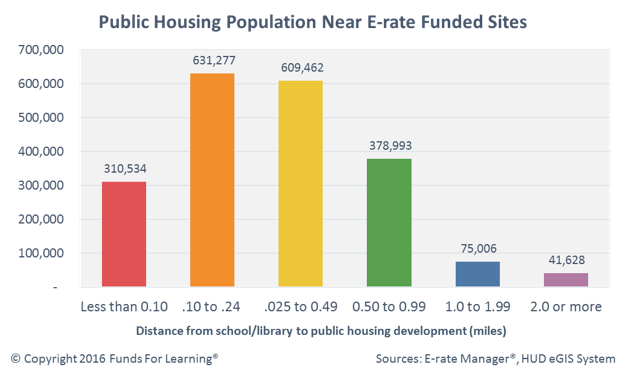 I have known for a long time that schools or libraries were right there in our communities; but I have to admit that I did not appreciate the proximity to homes — especially homes that are today without high-speed Internet access. Almost every public housing development is within one mile of an E-rate funded site. By allowing these locations to open up to the communities around them, at no additional cost to the program, the FCC will help tear down the wall that keeps millions of Americans disconnected from today’s digital society.

You can read our comments to the FCC and view more of our data analysis here.

If you support this cause, please consider letting the FCC know.