FY2016 funding commitments continue to move forward with USAC issuing $222.8 million in commitments in November. The total committed for FY2016 now stands at $1.15 billion, with another $2.39 billion still pending.  7,274 applicants are still waiting to receive funding commitments for the current funding year.
Despite the challenge that the delay poses for schools and libraries, the current amount of funds committed and still pending as of November 30 does not vary dramatically from the average of the past ten years.
Committed Funds
From 2007 to 2016, the amount of funds committed by November 30 averaged $1.60 billion. For the current year, the total committed amount is $1.15 billion. 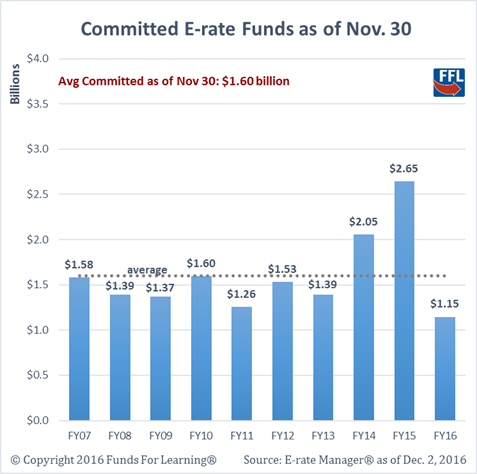 As illustrated below, the total FY2016 funds committed currently falls $0.45 billion below the average committed amount. This means fewer funds have been committed than average. FY2011 was similar to this year. 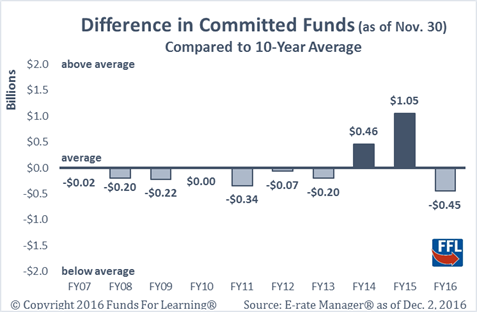 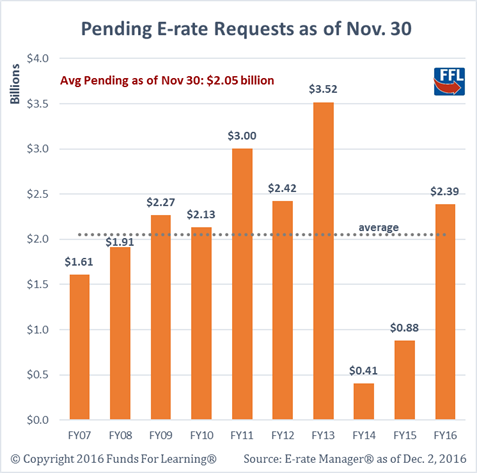 As illustrated below, the total FY2016 pending amount as of November 30 is $0.33 billion above the average, meaning that more funds than normal are still pending. Although still significant, the deviation in 2016 is smaller than several years, including FY2013 and FY2011 which had significantly higher than average pending amounts as of November 30. 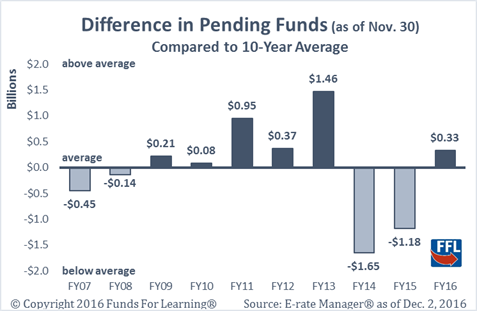 Conclusion
When comparing the progress of funding commitments in FY2016 to other funding years, it is clear that FY2016 is indeed slower than most years, especially when compared to FY2014 and FY2015. This is unquestionably the result of USAC’s largely counterproductive efforts to streamline and improve their online systems. However, as frustrating as the current situation may be, by historical standards, FY2016 is neither that much better or worse than many other funding years.
Analysis