More than 10,000 additional high speed data connections were submitted this year on E-rate funding applications than were submitted in 2016. This includes a 50% jump in the count of lines with a download speed in the range of 100-to-500 Mbps. We estimate that there were 22,750 of those lines last year. This year, in 2017, we estimate the count is 33,353. 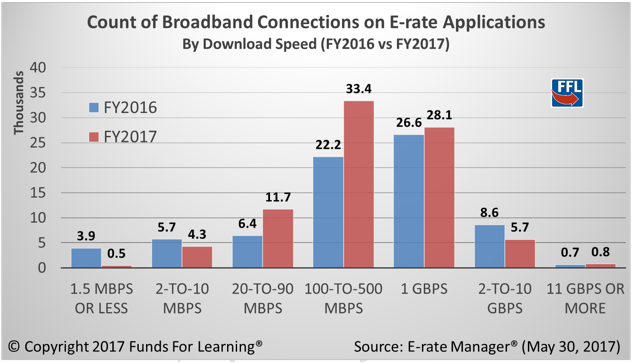 Even more remarkable is the fact that the overall funding requests for these services is about the same, or even lower, than last year. In short: there are more sites getting faster connections at a lower cost per megabit than ever before. What is driving this? One clue might be found in the number of bids received. Looking at 2017 versus 2016, there was an increase in the average number of bids received for broadband and Internet services. 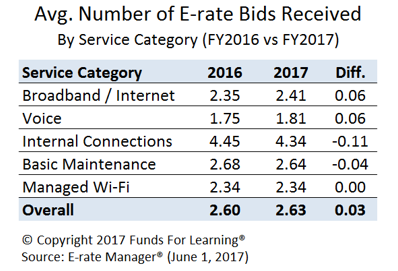 We only have two years of data for comparing the counts of proposals received, and without further context it is difficult to fully evaluate the impact of the additional bids; however, it does seem somewhat suspicious (in a positive way) that the average unit prices for broadband services have declined while the average number of bids has increased for these services.
*****
Demand for E-rate discounts is lower this year than last year. There are multiple factors driving this change, and not all of them are positive; however, while focused on fixing the things that need fixing, we should not lose sight of the positive changes taking place as well: faster broadband at a lower price is something we can all celebrate.
Analysis