Y’all ever wonder exactly what makes Special Construction…special?  I mean, we’re already imbued with so much specialness in our daily lives! To wit:
Special sauce!
Special agents!
Special!
But come on.  Special sauce is really just 1000 Island dressing.  Cars can’t really bend like that.  And (all respects to Shirley Manson) was Garbage ever really anyone’s favorite band?
And then in the E-rate world, we have SPECIAL construction.  How exciting does that sound?  “I’m going to get a specially constructed network just for me!”  But increasingly, the reality is that special construction leads to special questions, special delays, and special headaches.
Thanks to the FCC’s increased transparency requirements in the Seventh Report and Order, we can now track every E-rate funding application where discounts have been requested for Special Construction.  As of July 19, the data shows 426 FRNs for Special Construction in Funding Year 2016.  397 have received a funding decision thus far, and of those, 55% have been denied.
Does that seem a bit high to you?  It does to me.  Overall in Category One for FY2016, only 3.8% of FRNs with a funding decision have been denied. 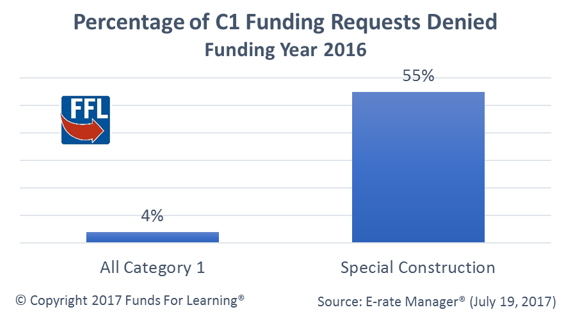 So what’s going on?  The funding decision explanations give us some highlights:
And the data is replete with interesting one-off denial reasons, including familial relationships between applicant and service providers, applicants “specifying a preference” of self-provisioning (which “deter[s] other service providers from submitting a bid”), lack of valid contracts, applicants not considering all submitted bids, applicants specifying equipment makes/models without “or equivalent” in the text of their bids, invalid bid evaluation criteria, and more.
Sounds like it’s time to consult a specialist2.  What advice do we have for applicants seeking support for special construction in FY2018 and forward?  Make a plan, get started early, keep meticulous records, and, if I may be so bold, do whatever you do to conjure up a bit of luck.
It is very clear from reading through denial and modification explanations for Special Construction FRNs that they are all flagged for special scrutiny.  Case in point – the overwhelming majority of denials (that aren’t due to cancellation) are for general E-rate compliance issues that aren’t unique to fiber or Special Construction at all.  Here’s a few tips:
It bears mentioning that discounts have been approved for around $90M worth of Special Construction charges, so applicants who are willing to put in the work can, in fact, see the reward.  There were even 20 FRNs which were funded without any apparent modifications.  To those applicants, we offer a tip of our hat:
1 These are pretty easy to search for, because USAC’s boilerplate decision explanation references figures “outside of the excepted range of construction costs.”  We assume they mean “expected.”  We also have no clue what that range might be.
2 See what I did there?  I’ve been talking about all this special stuff, then I used the term “specialist.”  It works two ways, because I am one of those specialists, so it serves as both a Grade B+ pun as well as a thinly veiled advertisement for our services.  Behold my genius.  Our marketing folks are going to love this.  I’ll show myself out.
3 I highly suspect that many of these addendums were at USAC’s suggestion due to their outreach efforts during applicants’ bid processes.  We don’t have data on how many applicants were contacted or what suggestions were made, however, so this is just an educated guess.
Commentary