Voice Expenses Rise. FCC Can Help. Will It?

The 2015 Modernization of the E-rate program included a significant change to the eligible services list: the phase-out of support for voice services. Historically, telephone service had been the most popular and widely requested service in the E-rate program. Indeed, even after the phase-out started, voice was still the most requested service for two years. It was not until 2017 that voice service dropped from the number one spot.

I have previously commented on the drop in the number of E-rate applicants and dollars requested. A key factor in this trend is the phase-out of discounts for telephone service. It makes perfect sense that the loss of the most popular (and necessary) service would have a negative impact.
It’s interesting to note that the FCC’s decision seems to have been driven in large part by two assumptions. First, the FCC said there was not enough money to continue supporting voice services. We now know this assumption to be false. Funds For Learning estimates that overall demand in FY2017 is about a billion less than the annual funding cap. There is plenty of room for telephone service. (See ¶ 137 of the First Modernization Order)
Second, the FCC seemed to think that taking away support for voice services would spur on schools and libraries to shift to VoIP technology. Again, this assumption seems to have been off. Many applicants that I know had in 2015 long since made the shift to VoIP-based telephone service. Furthermore, at the very moment the FCC was aiming to encourage this digital transition, it took away support entirely for the purchase of VoIP telephone switching equipment. Therefore, those schools and libraries who had not already made the change to VoIP found themselves without the E-rate support to encourage that transition. (See ¶ 138 of the First Modernization Order)
Unfortunately, rather than declining, the average annual telephone bills have increased. In 2013, the average applicant seeking support for telephone services reported a pre-discount annual expense of $36,640. Now, in 2017, that average annual expense has climbed to $41,119. At the same time, the average applicant has seen their out-of-pocket expense for telephone service increase from $10,743 to $31,119, more than triple what it was in 2013. 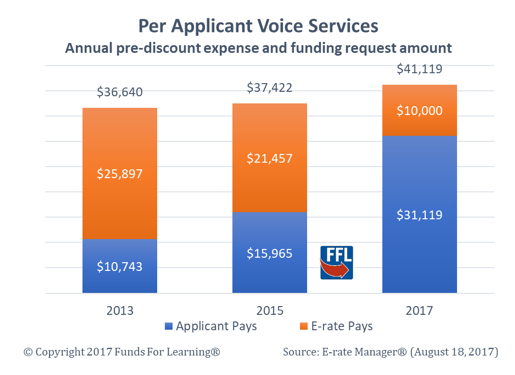 These are real dollars that are having real impact on school and library budgets. Fortunately, there is a window of opportunity to fix this. As part of the Modernization Order, the FCC is required to study the impact on applicants of the phase-out of voice services. Below is their specific instructions:
¶ 143. During the initial two years of the phase down of support for voice services, we direct the Bureau to study the impact of these discount reductions for voice support on E-rate recipients and to study the transition of eligible schools and libraries to VoIP services. The Bureau shall report its findings to the Commission by October 1, 2017, after completion of funding year 2016. If, at the conclusion of this study, no further action is pursued by the Commission before the application filing window opens for funding year 2018, the phase down will continue.
I expect that the FCC’s analysis will closely mirror ours:
I am looking forward to seeing what the FCC’s take on all this is. If I were in the Chairman’s office, I would take this opportunity to return voice services to schools and libraries. The additional support will help applicants pursue their broadband initiatives. And that is something we can all agree is worth fighting for!
*****
Next week, I will share a few practical ideas for how the Category Two budget system can be improved.
Analysis