A lot has happened in the past three days. All but one event was completely unexpected. Perhaps I should explain.
Tuesday was Halloween. We live in a big trick-or-treat neighborhood – to wit, we bought 600 glow stick bracelets to give away as goodies, and we gave out around 400 of them over the course of the evening before we shut the lights out. It’s great fun, and we always invite our friends and family over to enjoy the festivities (and frankly, to help us manage the onslaught of trick-or-treaters which is a full-time job for a few hours.) I was cooking some hot dogs for the kids out on the grill and came inside for something. Got distracted, then realized I had forgotten about the dogs. Anticipating maximum hot dog explodage, I ran as fast as I could out the back door and over to the grill…almost. Sprinting in cowboy boots isn’t the smartest idea, and I managed to twist my ankle and come down full speed, full weight on the side of my left foot. By the end of the night, I’m swollen and sore – by the next morning, all I can really manage is slowly hobbling around. So in keeping with tradition, I headed off to Minneapolis nursing an injury that was a direct result of my own clumsiness. I’m sure y’all would tell me that I probably should have put this one in the “expected” column, but ever the optimist, it wasn’t the way I had anticipated traveling.
Uneventful flight to Minneapolis, and when we arrive it was cold. There had been rain in the forecast, but it ended up being big beautiful snowflakes coming down at a pretty good pace for a big part of the day. It wasn’t quite cold enough for accumulation, but having just come back from vacation in a tropical clime less than a week ago, snow was an unexpected surprise. Minneapolis seems like a nice place. I spent most of the day trying to stay off my aching foot, but Kyle went exploring and found a cool museum.
Wednesday night, we went out for dinner at Butcher & The Boar. Highly recommend as long as you’re a carnivore (not so much if you’re a vegan.) I’m a big fan of culinary creativity, and I found it in this delightfully odd appetizer: peanut butter stuffed jalapenos. They took jalapenos cut in half lengthwise, and I think they put them in a smoker – but only until they were about half cooked, as they still had a good fresh snap to them but also just a hint of smoke flavor. Then they were filled with peanut butter that had some kind of golden raisins (or maybe currants) and spices mixed in, and warmed through. Garnished with queso fresco (or maybe cojita) and cilantro.  Completely unexpected and off the wall, entirely delicious.
The next day I went to USAC training.
When training was over, we caught a Lyft back to the airport. Traffic seemed pretty heavy, but we weren’t driving so we got immersed in conversation. Next thing you know, tires are screeching loudly and our Lyft is deftly swerving into the shoulder to avoid getting rear-ended. I look up and the driver is white as ghost: “man, that was really close.” And he was right – that was the closest I’ve ever been to getting in a wreck in a cab. Unexpected.
Finally board the flight home, and once we sit down Kyle asked me if I had noticed that Sam Bradford was sitting up front. Dang, I had completely missed him! A few minutes later, I look up and Cathy is putting her bag in the bin. We had been in different cities and had no idea we’d be on the same flight home. I yell, wave my arms, try to get her attention – nothing. So then what happens? She goes and takes the seat RIGHT NEXT TO SAM BRADFORD. I snag my phone and fire off a text message making some snarky comment about how she always gets the best seat on the plane. She turns around and we finally make eye contact, and I’m trying to get her to notice her seatmate… to no avail, as it turns out. She didn’t notice who she was seated next to until something like 20 minutes later (ha!) Needless to say, that was all pretty unexpected as well.
John really likes charts, so I’ve made a chart of the level of expectedness of all the things that happened on my trip to Minneapolis: 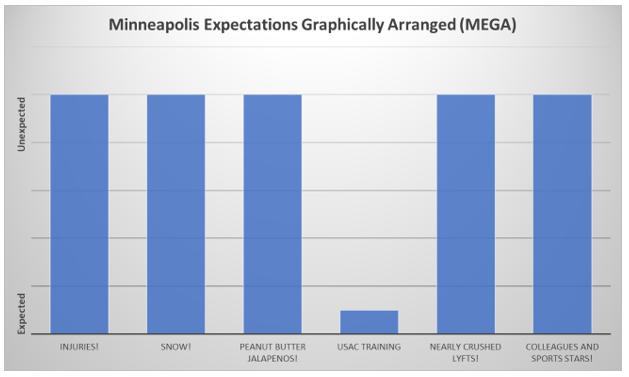 Eagle-eyed readers may notice a lull in the chart there. That’s the spot for the USAC applicant training that was held on November 2. Everything at the training was, well, just as I’ve come to expect.
The training had all of the usual highlights. There were EPC demonstrations, discussions of program rules and processes, demos of upcoming data analysis tools. We got a hint that USAC may be announcing filing window dates soon. Lots of discussion about fiber services. Applicants asked questions that were specific to their situations, and USAC tried their best to answer in a way that would be universally applicable. Consultants asked theoreticals just to make themselves sound smart, and USAC tried their best to answer without getting annoyed. A lot of the questions from everybody were really just complaints expressed in question form. Still, USAC staff were friendly and personable, and seemed willing to have one-on-one conversations with anyone who wished. It was exactly what I expected from a USAC training, and I’ve been to many.
I feel like frustration with the program’s administration has been brewing for a while. You don’t have to talk to E-rate folks very long to end up hearing a complaint about some kind of perceived absurdity:  “PIA-this,” “EPC-that.” I picked up on a lot of it at last year’s training, but (optimism, remember?) I was genuinely hopeful that things would turn around; that USAC would be making significant improvements that resulted in a program that came closer to producing the outcome all stakeholders desire, with a minimum of frustration. I gave them some credit for owning up to some of their troubles.
But here’s the deal. I’m starting to think that I was short-sided in holding out hope that USAC would ever behave as anything more than what it is:  a bureaucracy.  Now, before you go off accusing me of taking a cheap shot, consider Webster’s definition:
bureaucracy
…
2:  government characterized by specialization of functions, adherence to fixed rules, and a hierarchy of authority
3:  a system of administration marked by officialism, red tape, and proliferation
I’m genuinely not trying to be derogatory – far from it, actually.  But think about it:  I’ve been doing E-rate for a long time, and looking back I don’t know that I remember a time when USAC didn’t act consistently and reliably as a textbook bureaucracy.
And really, that’s the source of a lot of the frustration, isn’t it? Because most the stakeholders in the E-rate program operate with a different motivation.  Schools, while subject to mountains of red tape in their own right, still chase a philanthropic goal:  finding ways to best educate young people. And service providers (and consultants) are driven by some sort of “up and to the right” mentality, ultimately.  Might be profit, or growth, or professional development, whatever. I’d argue that most of the participants in the program have some sort of intrinsic motivation that extends beyond the continued existence of the organization.
But bureaucracies are different.  A bureaucracy makes improvements exclusively in the interest of its continued bureaucratic operation. It generally deals with fixed inputs (rules), and succeeds when it provides an output (processing applications), regardless of whether that output has any utility to the recipients and irrespective of how anyone feels about the output. Bureaucracies measure success using different benchmarks. USAC would technically be 100% successful if it denied every single funding application submitted in a given funding year, as long as it did so in a reasonable amount of time and “correctly” in accordance with its mandated inputs.
And to be honest, that might not be so bad. (Not denying everything; that would stink. I mean that maybe the administrator being an inherently bureaucratic entity isn’t such a bad thing.) I’ve said it for a long time in various contexts, but it also holds true in the larger sense:  E-rate isn’t merit-based.  Its regulatory structure dictates that as long as certain conditions are met, funds will flow. Despite the fact that the funds are absolutely mission critical for the provision of education (a laudable and altruistic endeavor), that type of motivation has no consideration in the E-rate rules. So maybe the perfect way to administer such a program is, well, with a bureaucracy.
Perhaps that can temper our relationship with program administration. It’s at least a perspective to consider when we’re making suggestions or leveraging complaints:  USAC’s objective is to process your application quickly and correctly, not make you feel warm and fuzzy about the process or the outcome. That doesn’t mean that they don’t genuinely care about your school and students, or your company’s bottom line – I think they do.  It’s just a matter of (significantly) different organizational objectives.  We (applicants, vendors, consultants) are trying to make good happen, and we get frustrated when we think USAC isn’t doing their part to help us with that. But USAC’s job is making processing happen. If they can do that with a reasonable amount of efficiency and accuracy, they succeed irrespective of whether we think the result furthers our good.
And thus, the training session was the most expected part of my jaunt to Minnesota this week. Gaining a different perspective on the program, however – that one caught me by surprise.
Commentary