The USAC Schools and Libraries Committee voted this week to recover $1.5 million in funds it believes were improperly disbursed to applicants based on the results of beneficiary audits. Commitment adjustments (COMADs) and Return of Improperly Disbursed Funds (RIDF) letters are some of the most dreaded announcements that E-rate applicants receive. Their receipt often foreshadows letters of appeal, disputes with vendors, legal fees, and, of course, in many cases, the return of funding to USAC.

Unlike funding commitment decisions, the FCC currently does not require USAC to publish these letters. Despite their significant financial impact, and their potential to help other applicants better manage applications and documentation, the return of funds remains shrouded in relative secrecy.

Funds For Learning recently completed a first-of-its-kind analysis of returned funds. Our analysis showed that the number of applicants and the amount of money being recovered has increased significantly. From 2013 to 2016, there was an average of $4,377,199 collected per year in returned funds. In 2017, the number surged to $60,877,131. 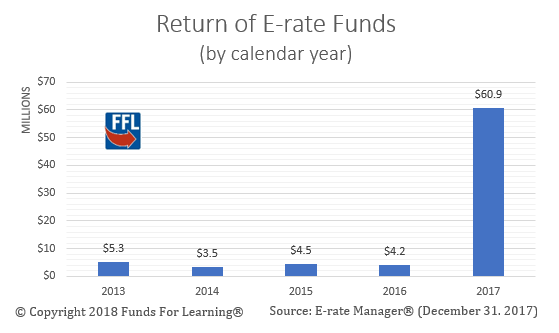 Because USAC does not make public their collections efforts, it is difficult to analyze the underlying causes for this surge. One clue is the age of the commitment adjustments. For the 2013-2016 period, the commitment adjustment occurred, on average, 2.8 years after the start of the funding year. This is consistent with the timeframe of audits that result from the disbursement of funds. Funds are disbursed in year 1; payments are audited in year 2; and the audit findings are approved and the recovery of funds initiated sometime soon thereafter (i.e. 2.8 years from the start of the funding year.)

However, the COMADs in 2017 are different. Not only are there more applicants, with more money at risk, but the COMADs themselves are nearly twice as old. In fact, the oldest COMAD was from funding year 2001, more than 15 years ago.

A full summary of the data is available here.

NOTE REGARDING METHODOLOGY: The estimated return of funds is calculated by identifying funding commitments for which the disbursed funds exceed the revised funding commitment amount. This method does not capture the return of funds in which the revised commitment amount still exceeds the disbursed funds. Also, our analysis excluded all data related to the New York City Department of Education and its settlement with the FCC.