Although the pace of FY2018 Form 470s has increased significantly, it is unclear if the total number of postings will exceed 30,000 as it has in prior years. If it does not, one factor may be the number of existing multi-year contracts.

Pace of Form 470s
Procurement activity has switched into high gear for schools and libraries across America. More than two thousand Form 470 request for bids have been posted in the past week, with the pace increasing each day. February 22 is the deadline for E-rate applicants to post their competitive bidding requests and still meet the mandated 28-day waiting period before awarding a contract and submitting a funding application by March 22. 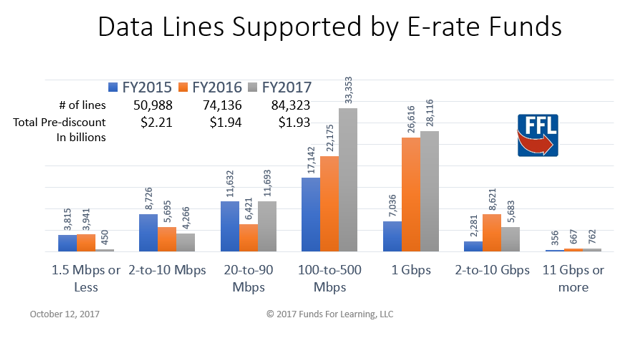 From 2016 to 2017, the number of data lines supported by the group increased, and so did the average speed of those lines; yet, the total cost for these services declined slightly. How can this be? There is not likely to be one answer to this question, but certainly one key component is the use of multi-year contracts. A multiyear contract usually brings with it a lower per unit cost.

And, it just so happens, that the number of applicants who need to bid out their contracts each year has been declining. More multi-year contracts, leads to lower pricing, which may lead to fewer Form 470 postings.

Coming into FY2018, there is a record low number of applicants with expiring contracts, only 20,342. Therefore, we can expect that fewer applicants will be posting Form 470s, and if the last two years are any indication, there is a good chance that around 19,000 applicants will post a Form 470 this year. (As of today, the current total count of FY2018 Form 470 applicants is 14,042.)

I expect to see many thousands of Form 470s posted over the next two weeks; however, I do not expect that quite as many Forms will be posted as prior years; and that is because, among things, the number of applicants who now enjoy better pricing due to multi-year contracts.