4,231 miles from Washington, D.C., near the middle of the Bering Sea, is the Pribilof School District Consortium, on Saint Paul Island, Alaska. It is difficult to imagine a more remote location for two schools and a library to exist. If ever a place needed Internet connectivity (and E-rate funding), surely this is it. 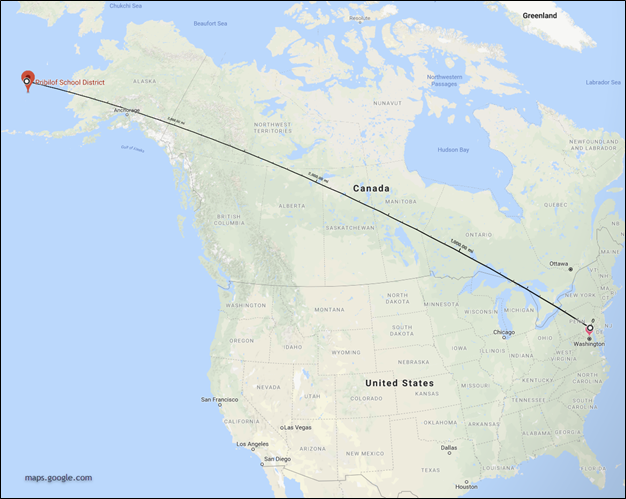 Back in 2016, Pribilof, like thousands of other E-rate applicants, found itself stuck in the quagmire known as the rollout of EPC. Intended to simplify the application process, the EPC online portal instead complicated and delayed it for everyone. (Two years later, the E-rate community is still struggling to work with the system.) For Pribilof, the problems with EPC, along with poor communication from USAC, meant the loss of more than $300,000 in much-needed support.
Recognizing the inherent wrong in the situation, Pribilof appealed to the FCC. This week, more than two years later, the FCC released the Pribilof Order, authorizing USAC to begin processing FY2016 funding applications for Pribilof and any other similarly situated applicants.
I am delighted for Pribilof; and I am encouraged by the FCC’s bi-partisan action. Yet, deep down inside, I am troubled. Troubled that it took two years; troubled that it took the involvement of FCC Commissioners; and troubled that a waiver or special action was even necessary. Let’s review the facts of the situation.

Here we have an existing applicant, having trouble using EPC, getting their application submitted in a reasonable timeframe, submitting an application that is both sensible and consistent with their prior applications, and requesting an amount of funding that is easily within the realm of feasibility for USAC to support. In other words, this is a no-brainer. Pribilof should not have been required to fight for two years for this outcome. It should not have required an act of Congress, or, as it were in this case, an act of the Federal Communications Commission.
I understand that there are situations that forge new ground and require new precedent. I understand that there are situations that require deep thought and careful deliberation. But this is not one of them. Waivers and special orders should only be necessary in rare and exceptional circumstances; unfortunately, wrongful denials and USAC system errors are more the rule than the exception. There are hundreds of different Pribilof-type scenarios floating through the system. They may have different circumstance associated with them, but they all tie back to the inability of USAC to fix proactively, and without special permission, the problems that it creates.
I encourage the FCC to take a step back and look at this situation systemically. Why is USAC not empowered to make a no-brainer decision when it comes to applications like Pribilof’s? Why is USAC not allowed to process an invoice without special permission? Why must an applicant itself submit an appeal or seek a waiver to fix a problem not of its own making? And why, oh why, if adequate funds are available, is USAC required to deny out-of-window funding requests?
***
I applaud the FCC for their action this week, and I am grateful for the separate statements by Commissioners O’Rielly and Rosenworcel. It is a great sign when the Commission can come together to support a community like Pribilof. My sincere hope is that the FCC will leverage this momentum to address the deeper root of these challenges. In doing so, the FCC can help thousands of applicants all across America.
Commentary