Imagine getting pre-approved for a home loan, purchasing your house, and moving in, only to receive word after the fact that the bank decided to change your approved loan amount and interest rate without any explanation. The retroactive change would be frustrating; and, not being told why would be simply infuriating.

Unfortunately, this is a scenario that is all too familiar to E-rate schools and libraries. Each week, I hear from applicants who have had reimbursements denied or been told that their funding commitments have changed. It is as if an army of acronyms have conspired against them: COMADs, RFCDLs, RIDFs, BNLs… and it all takes place with little or no explanation. It just happens. Of course, applicants can dispute USAC’s actions, but it is hard to know on what grounds to submit an appeal when there is no information to go on.

These hidden changes are happening more frequently. As previously noted, there has been a big jump in USAC requests for the return of funds. There has also been a dramatic increase in the overall number of changes to funding commitments. As illustrated below, in calendar year 2015, there were an estimated 3,519 funding commitments changed after they were awarded. By 2017, that number had skyrocketed to over 9,300, and 2018 appears to be on track for a similar pace. 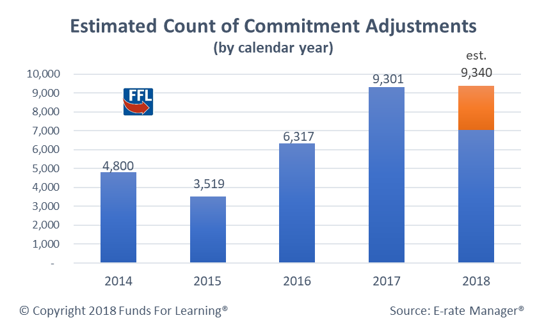 All these changes occur out of sight and without adequate public documentation. Back in the summer of 2002, Funds For Learning submitted a Freedom of Information Act request requesting that the FCC start making public the E-rate funding commitment data. By the fall of 2002, the E-rate community started to get a peek inside the funding commitment decision process. This increased accountability for all parties.

It’s time now for the FCC and USAC to once again throw open the curtain and let light shine on the E-rate funding data. This time, we need to see what is being changed… and why? Whenever there is a denial, reduction, or adjustment to a form (of any kind), an applicant deserves to challenge USAC’s decision, and fairness dictates that they have the specific information necessary to make their claim.

Schools and libraries benefit from a healthy E-rate program and one of the best methods of keeping the program strong is to keep E-rate funding decisions out in the open for all to see.