E-rate applicants are reminded that with the closing of the FY2019 Form 471 filing window on March 27, the last date that a Form 470 can be filed to start the competitive bidding process while still allowing the minimum 28 day bidding period is February 27, 2019. It is strongly encouraged that applicants not wait until the final day to post a Form 470, as this means that they will be required to evaluate bids, negotiate and award contracts, and file their funding applications in a single day (a difficult task even for experienced applicants.) 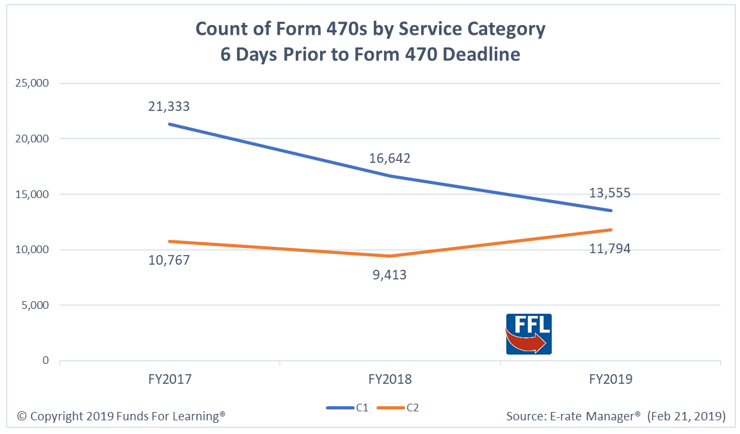 This is not to say, however, that the trend is indicative of a decline in demand for eligible services. The phase-out of support for voice service (previously the most popular funding request type and the most likely to be filed as a month-to-month service) has resulted in fewer applicants needing to procure services annually. In addition, multi-year contracts for Category One services are on the rise. In Funding Year 2018, Funds For Learning estimates that a record high of 43% of funding requests for broadband services were filed under a multi-year contract, compared to 37% in Funding Year 2016.

Despite a decline in Category One Form 470 filings, Category Two postings are on the rise. Possible reasons for the increase in Category Two procurement activity include uncertainty about the future of the availability of Category Two funds, as well as applicants who have reached the last year of their five year budget “clock” and are procuring services to take advantage of as much funding as possible before that clock runs out.