The Category Two budget system has provided more than $4.35 billion of E-rate support to schools and libraries since 2015. As the FCC is considering improvements to the system, one key factor is the number of school and library sites who “maxed out” their C2 budget. These sites needed additional support than was available to them. Funds For Learning estimates that there were 37,794 sites that would have benefited from additional C2 funding.

To address this need, one of the ideas being discussed is to allow school and library systems with multiple locations the freedom to transfer their C2 budget balances between sites. This is called the consolidated budget approach. The logic goes something like this: If it is less expensive to add Wi-Fi in one building and there is a balance of available discounts than those funds can be applied to a Wi-Fi project at a different, more expensive site. Overall, this would free up millions of dollars of support and provide local decision makers additional freedom and flexibility to help schools and libraries that need support the most. Funds For Learning is a strong advocate for this approach and we think it is an absolute necessity. 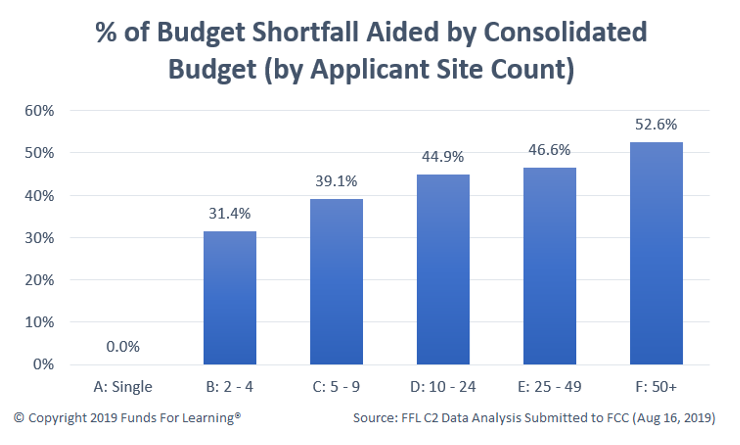 The following table shows the counts of applicants and sites impacted by the current Category Two budget shortfall. There is an estimated total five-year shortfall of $841.9 million, impacting 37,794 sites nationwide.

The following table shows 29,768 sites would benefit from a consolidated budget system. On average, 42.2% of the budget shortfall would be address by this new approach; however, the additional support would be more heavily weighted towards larger applicants.  The dollar amounts are the total dollars needed over a five-year period.

Consolidated budgets will clearly play a big role in meeting the needs for Wi-Fi in schools and libraries. Helping close to 30,000 sites get the funding they need would be a significant step forward. The key is that the FCC recognize that the opportunities to improve the C2 system are multi-faceted, and therefore require a multi-faceted approach. Funds For Learning recommends that the FCC adopt consolidated budgets along with an increased budget floor of $30,000, a per student budget factor of at least $250, and a $6.00 per square foot budget factor for libraries.
Analysis