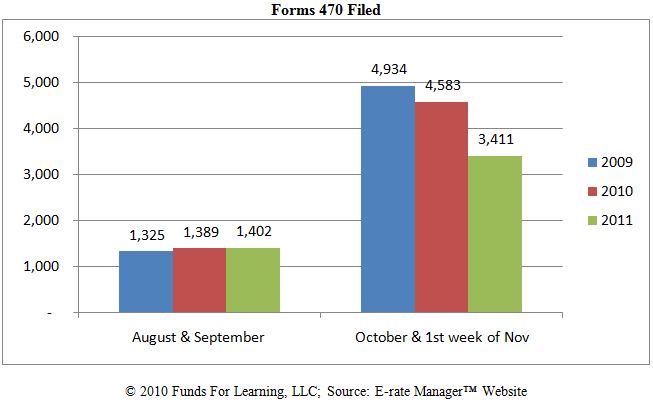 There are several factors that could play a part in the correlation between the release of the Orders and the decline of Forms 470 filed. The most likely factor is the upcoming release of the new Form 470.

The FCC Sixth Report and Orders revealed updates to the Forms 470 and 471. The new forms will be available before the opening of the FY2011 filing window. While early filers of the Form 470 for FY11 will not be required to post another Form 470, they must certify the Form 470 before the new form is released in order to avoid having to resubmit the Form 470. Because the release date of the new form is still unknown, many applicants may be holding off on beginning any Forms 470 if they cannot certify immediately in order to avoid resubmitting.

Another factor that may be contributing to the slowed pace of Form 470 filings is the new seemingly over-broad and ambiguous gift ban regulations. The FCC codified the regulations regarding gifts from service providers to align with the gift rules applicable to federal agencies. According to the Order, applicants must now follow either their own state/local laws regarding gifting or the FCC rules, whichever is stricter. Applicants may be waiting on further guidance and explanation on these rules before moving forward with any FY11 applications.

Applicants that regularly request basic maintenance services such as SMARTnet may be waiting for further clarification on the Eligible Services List (ESL) for FY11. Prepaid retainers for services that may not actually need to be preformed were seen as a “potential waste of E-rate resources” and were deemed ineligible for FY11. Basic maintenance services must now be considered on an as needed basis. However, applicants may find it difficult to estimate the amount of actual service needed to equipment.

The current amount of Forms 470 filed is not an indication of the total number of applicants that plan on participating in the E-rate program. So, when are the others planning to file?

If the release of the new Forms 470 and 471 coincide with the opening of the filing window, then we are likely to see an influx of forms the first week of the Form 471 filing window.

Even though the window to apply for funding has not been announced and the new Forms 470 and 471 are yet to be released, schools can use the current Form 470 and conduct their procurement processes as usual. Getting a head start on the procurement process may help applicants avoid the last minute Form 471 filings that most applicants endure each year.