Counting the Cost: Estimating what it will take to get ConnectED

There was a lot of enthusiasm earlier this month when President Obama announced the ConnectED initiative to bring high speed Internet access to 99% of our nation’s students. The President set an initial target of at least 100 Mbps of connectivity per 1,000 students, with an ultimate goal of 1,000 Mbps (1 Gbps) per 1,000 students. But what will it take to implement the President’s vision?

As researched and documented by the State Educational Technology Directors Association (SETDA), in its Broadband Imperative white paper, the need to connect students is being driven by many factors, including new online instructional resources, online assessments, one-to-one computing initiatives, students’ wi-fi enabled devices, and so forth. The President, in his ConnectED announcement, affirmed what SETDA and others have been saying for a while: it is time to get our schools off the digital driveway and onto the digital highway. It is time to deploy faster data connections to our classrooms and ensure that high-speed Internet for students is the norm, not the exception.

The President has called on the FCC to update and expand the E-rate funding program in order to help fuel higher speed student connections. Funds For Learning® estimates that E-rate applicants account for about 98% of all K-12 students (excluding home schooled students). Studying E-rate application data provides a wealth of information about the number of school and library buildings to be connected and the number of students to be served. Current E-rate discount rates and funding requests provide a baseline for existing demand for telecomm and Internet connectivity. Combining this information, it is possible to estimate, using very broad strokes, the resources required to implement the President’s plan.

In FY2013, applicants applied for E-rate support at 146,767 schools and library buildings in the United States.

The schools serve a total reported population of 52.4 million students with a median enrollment of 373 students per school building.

Connecting all of those buildings is not inexpensive. For the funding year starting July 1, 2013, E‚Äërate applicants reported total annual telecommunications and Internet expenses of $3.63 billion, for which they requested $2.72 billion in E-rate discounts.

The table below shows the estimated cost of providing a 100 Mbps or 1 Gbps connection to each of these buildings. The estimate shows the annual cost over a range of monthly expenses. For example, if every school and library building in the United States received a 100 Mbps broadband connection for $1,500 a month, the total annual expense for this service would be $3,184,200,000. Based on current E‚Äërate discount rates, the total E-rate demand for this service would be $2,300,041,800, or $40.82 per student. 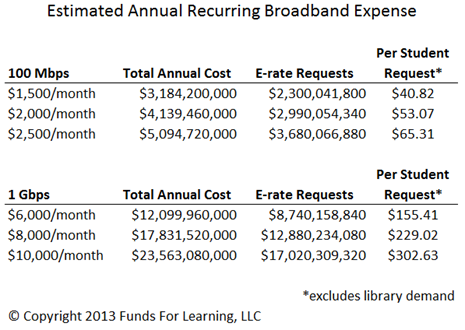 The analysis assumes a $2,000 or $4,000 one-time setup fee for 100 Mbps or 1 Gbps broadband, respectively. Also, to account for their unusually high service costs, the annual expense is doubled for school sites designated as “Rural Remote” by the Department of Education.

The table below shows the estimated cost of providing additional internal connections infrastructure at each school and library building. It is assumed that no E-rate funding is available for administrative buildings.

The expense per building is based on the FY2013 average expenses per building for internal connections as reported by applicants. The E-rate funding requests are calculated using each building’s current E-rate discount rate. It is also assumed that Pre-K facilities and administrative buildings will have average internal connections costs similar to existing library infrastructure projects.

$6.8 Billion? Estimating the Impact on the E-rate program

Based on this data and other Funds For Learning® analysis, it appears that $125/student for schools and $21,576 per library will yield an adequate annual E-rate budget to provide 100 Mbps connections to each student and library patron.

For schools, the average cost per student is based on the following:

For libraries, the average cost per building is based on the following:

The President’s ConnectED initiative has the potential to positively impact every student and library patron in the United States. The reform required – and the limited resources available – to achieve this outcome necessitate careful planning and efficient use of resources.

These changes come about via one simple change to the existing program: a common sense limit on the amount of discounts any one applicant can request in a given year. This approach was first identified by the 2003 E-rate Waste, Fraud, and Abuse Task Force. At a time when every dollar needs to be used to its fullest potential, this simple change will protect the E-rate program for years to come and will ensure that the additional money the President has requested the FCC to provide to schools and libraries be used in the most efficient and effective manner possible to impact our communities.