It is difficult to debate potential solutions without first understanding the problem. Case in point: there is a lot of discussion right now about what changes should be made to the E-rate program. Those discussions stem from people’s view of what needs to be fixed. I find that the solutions bandied about are often rooted in perception, not fact. Today, I would like to debunk four misconceptions that I frequently encounter concerning the challenges facing the E‚Äërate program today.

For the past two years, the demand for telecommunications and Internet access has exceeded the annual funding cap. The chart below illustrates the total demand for these so-called “Priority One” services. 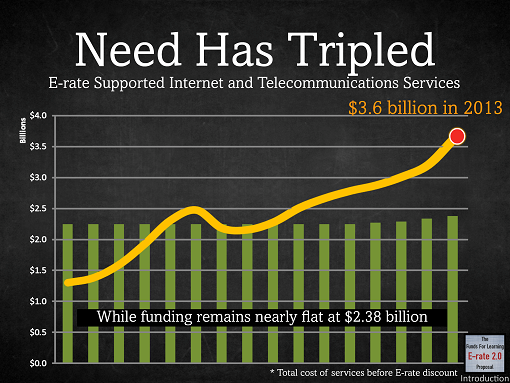 School and library demand for telecommunications and Internet access has tripled since 1998. This should not come as a surprise to anyone. In 1998, I had a dial-up Internet connection at my house. I paid about $25 each month for the service. Today, I have a dedicated Internet connection for which I pay about $75/month. That is three times as much as I paid fifteen years ago. It’s no surprise that the demand in schools and libraries has tripled. The only real surprise may be that it has not increased more than it has.

FACT: From the time that the FCC established the Priority funding system — with its all-or-nothing funding caps based on applicant discount rates — funding for internal connections projects has been drying up. Internal connections are one of the most cost-effective mechanisms for delivering bandwidth to students. That is why internal connections support was included in the original eligible services framework. Unfortunately, the false Priority 1 / Priority 2 dichotomy has forced schools to push more and more of their connectivity solutions into the telecommunications and Internet access categories.

I frequently hear statements that high-discount schools do not have enough “skin in the game”. It is said that they underpay for their services and that they should be forced to pay more. No doubt, there are “Big Spenders” in the E-rate program: high-discount applicants who aggressively apply for funding to the tune of hundreds or even thousands of dollars per student.  (In 2012, the average Big Spender requested 13.5 times as much per student for telecommunications and Internet access as the average applicant.

But there is a difference between being a high-discount school district and being a Big Spender. In 2012, there were 18.48 million students attending high discount rate school districts. 45% of these students were at school districts spending less than $50 per student. That’s about $4 per month (or less) per student for telecommunications and Internet access. That’s not unreasonable. And it certainly does not appear wasteful to me. See the table below. 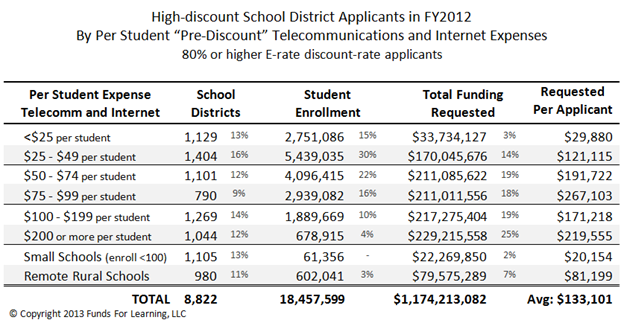 Highlights from this table:

Proponents of lowering E-rate discount rates fail to recognize the fact that a large portion of high discount applicants seek very reasonable amounts of funding. For example, in FY2012 there were 1,129 high discount rate applicants who requested less than $25 per student for telecommunications and Internet access. This group:

FACT: The main argument for lowering discount rates appears to be a desire to reign in unreasonable expenditures. As this table shows, not all high discount applicants are Big Spenders. Many of these applicants submit requests below the national average. Lowering their discount rates would be punitive, and, as illustrated in Funds For Learning’s E-rate 2.0 Proposal, is not necessary in order to reign in funding requests and encourage cost-effective decision making.

Myth #3: The Funds For Learning Order Caused This

A favorite myth of mine is that the Funds For Learning Order, issued by the FCC on August 22, 2011, contributed to the current challenges facing the E-rate program. The argument goes like this: if Funds For Learning® had not petitioned the FCC to fund applicants back in 2010, there would still be money for internal connections in 2013.

Here is the background you need to know about the Funds For Learning Order:

To date, the Funds For Learning Order has resulted in an additional $276,704,500 in FY2010 internal connections funding commitments:

FACT: The total impact of the Funds For Learning Order will be no more than $276.7 million. To date, it has resulted in the disbursement of $133 million in funds. Realistically, by the time all projects are completed and funding utilized, it is unlikely that the Order will result in more than $200 million in disbursements. Had all of that money been saved for 90%-discount schools, it would still only cover at most 10% to 15% of the FY2013 demand for internal connections at the 90%-discount rate.

One of the most common, if not THE most common, recommendations that I hear is the elimination of iVoIP and web-hosting services from the eligible services list — as if connecting students with new technologies is somehow contrary to the E-rate program’s mandate! Here is the breakdown of telecomm and Internet demand in FY2013: 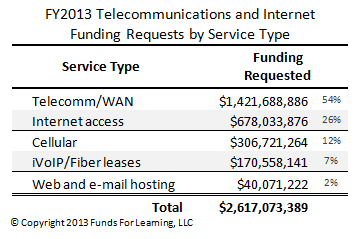 FACT: Set aside for a moment the policy discussion of whether or not web-hosting, iVoIP or other non-traditional means of connecting students serves the purpose of the program, is cost-effective, etc. The basic math is pretty clear. If you eliminate these services entirely, the FY2013 demand for the other services would still exceed the funding cap.

The Funds For Learning® Proposal

Funds For Learning® has prepared a proposal to address the real issues facing the E-rate program today. This proposal keeps the current discount matrix, eligible services list, and application process. Based on a 2003 Waste, Fraud and Abuse Task Force recommendation, the proposal is designed to:

You can read more about the Funds For Learning® E-rate 2.0 proposal at this site.